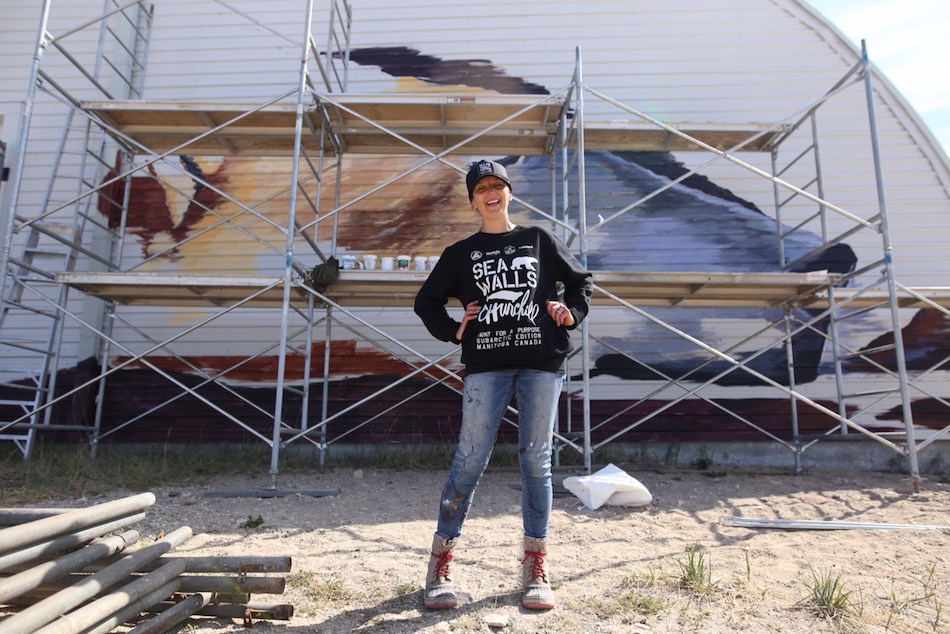 Winnipeg artist Kal Barteski in Churchill, Manitoba for Sea Walls: Artists for Oceans. Since its inception in 2014, the Sea Walls program has created nearly 300 murals in over 12 countries with 200+ artists from 25 different nationalities. (HANDOUT)

Barteski is the Churchill curator of Sea Walls: Artists for Oceans, which has invited artists from around the world to the northern Manitoba community for the 10-day experience in polar bear country. 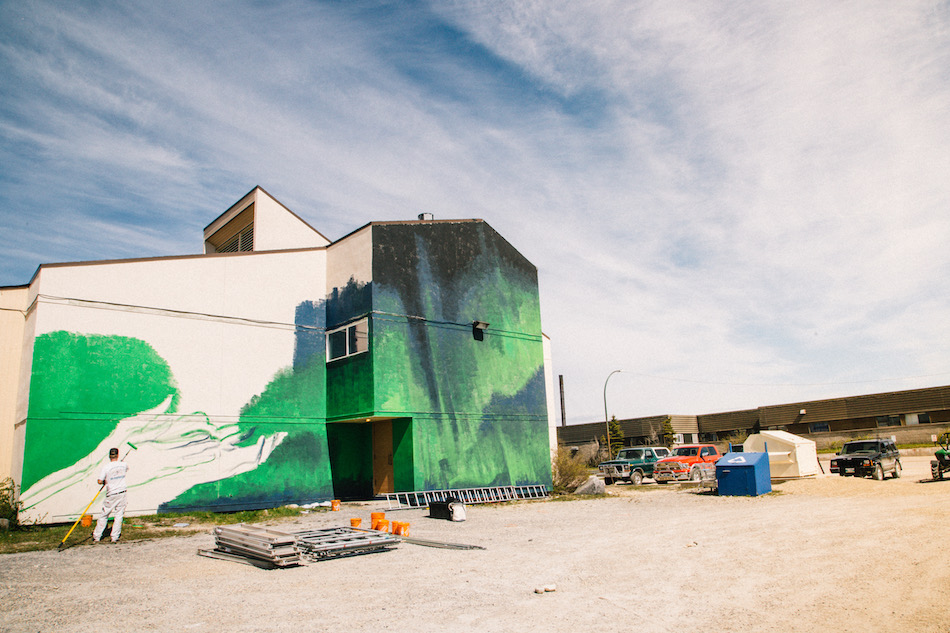 Winnipeg artist Charlie Johnston returns to Churchill for the second time with this Northern Lights inspired piece. He has been working on a pair of beluga whales throughout the week. His first visit to Churchill resulted in the Wolfes Along The Way. (HANDOUT)

Churchill was cut off in May from rail service when the Omnitrax-owned line was shut down due to flooding.

“Resilience is defined by the ability to withstand stress and to recover quickly,” says Barteski. “We could have easily decided to cancel the event, and residents in Churchill certainly thought we were going to. With the lack of a train to ship supplies and equipment, a lot of our time spent over the past couple of weeks has been about being creative, knocking on doors, and working with the gracious people of Churchill. This is a demonstration of what we can do when we rally together.” 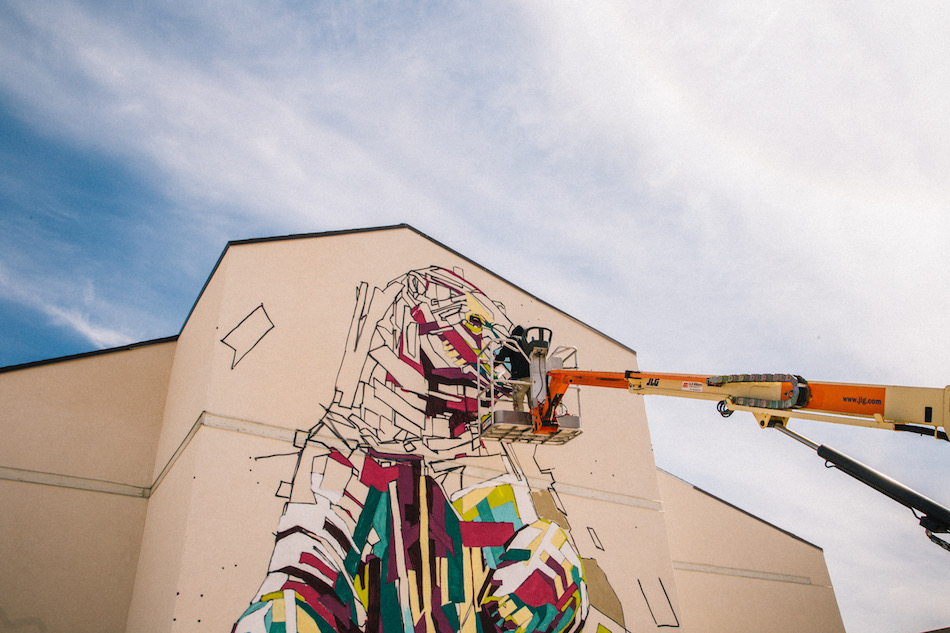 Arlin, from Brazil, transforms A Block with a very geometrical version of Churchill’s cuddly creatures. (HANDOUT)

The murals explore the history of the province and highlight some of the issues affecting its three unique eco-regions: Tundra, Taiga, Boreal Forest, and the Arctic Ocean.

Seventeen artists from Canada, U.S., Brazil, New Zealand, Germany, U.K., Spain, Australia, and Japan are also for the trip, as well as Winnipeggers Lana Bakun and Jason Syvixay, to make up the 30-member team. 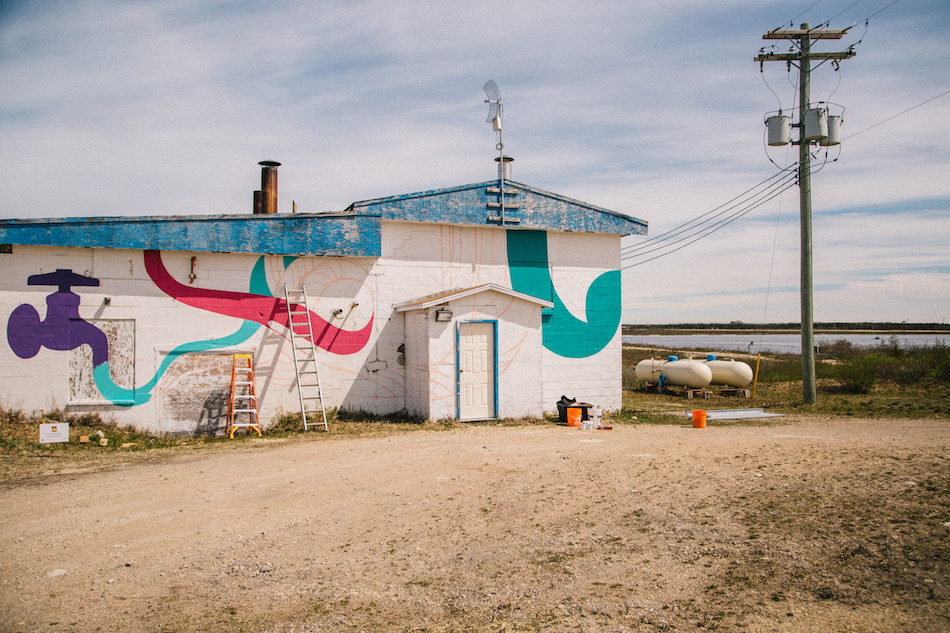 “I’m painting the Lake Pumphouse. I didn’t have any water to wash my brushes, so I used some of the water from the lake. The inspiration behind the painting is the lake, and the pump house’s role in providing water to the area. I’m appreciative of Churchill’s hospitality and the response has been incredible – people are eager to see some art on their walls.” – Takashi Iwasaki, Japan (HANDOUT)

“Polar bears are directly affected by the unprecedented melting of sea ice and subsequent habitat destruction at an alarming rate, resulting in a big challenge for the species to survive,” added Barteski, founder of the Polar Bear Fund. “What many people don’t realize is that polar bears spend the majority of their lives on sea ice and for that reason, they are considered a marine mammal. This is why our collaboration with Sea Walls is so important. We want to generate consciousness through the power of art.”

The artists are painting until June 26. Follow along on Instagram (@seawalls_ + @kalbarteski) and with the hashtag #SeaWallsChurchill.

Churchill is about 1,000 kilometres northeast of Winnipeg and has a population of roughly 900.