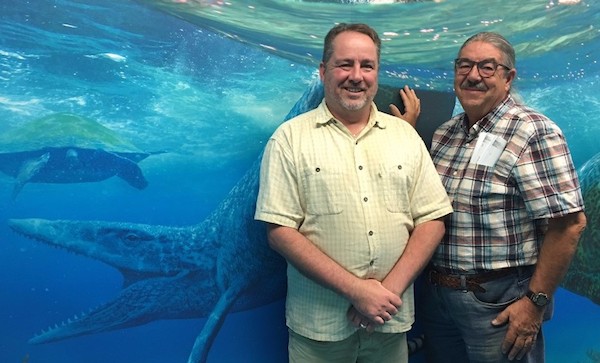 Peter Cantelon (left) of the Canadian Fossil Discovery Centre in Morden and Miami Museum representative Joe Brown pose with a depiction of the Tylosaurus pembinensis at the CFDC. (HANDOUT)

Miami, Manitoba is following the lead of the Canadian Fossil Discovery Centre in Morden to mount a Mosasaur fossil as part of a new exhibition.

The Miami Museum has partnered with the CFDC on the project, who knows a thing or two about Mosasaurs.

Museum officials say the specimen is the holotype of the Mosasaur species Tylosaurus pembinensis, Manitoba’s official fossil emblem. A holotype is a single type specimen upon which the description and name of a species is based.

“We are honoured and excited to be a part of this initiative,” said CFDC executive director Peter Cantelon. “We have an opportunity to help out a fellow museum and contribute to the long-term preservation of this scientifically important specimen so that Manitobans and visitors from abroad can enjoy it.”

The project is at the centre of a fundraising campaign the museum hopes to reach in time for its 45th anniversary.

The mounted skeleton is approximately 12 metres long and will be Canada’s second-largest Mosasaur, the largest being the CFDC’s Bruce.

A temporary exhibit on mosasaurs and plesiosaurs, including some fossils, will be in place during the summer at the Miami Museum while the Mosasaur skeleton mount is being prepared.

“This initiative is an important recognition of the foresight of local residents in collecting and preserving important and unique fossils from the local bentonite mines ” said Miami Museum representative Joe Brown.

“Residents and scientists now recognize the significance of what we have here in Miami is most worthy of preservation and further research.”