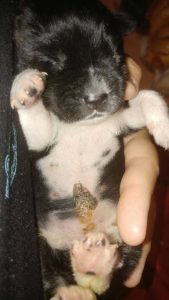 A one-week-old puppy born in northern Manitoba is fighting for survival after being infested with maggots.

Giga is now in the care of Manitoba Underdogs Rescue in Winnipeg. The puppy’s mother died shortly after birth, while her brother, Mega, was too ill and had to be euthanized after arriving in Winnipeg.

“When they were found both puppies were severely infested with maggots and in unbelievable amounts of pain. They were suffering from urine scalding due to a lack of care, and had temperatures so low they didn’t even register on a thermometer,” said Jessica Hansen, Manitoba Underdogs Rescue executive director. “It was one of the most disturbing cases I’ve ever seen.”

Hansen says they Giga is able to make a full recovery and is now being bottle fed.

“She’s getting stronger but it’s still day-by-day to see how she does.”

Donations for the dog’s care are being accepted online.