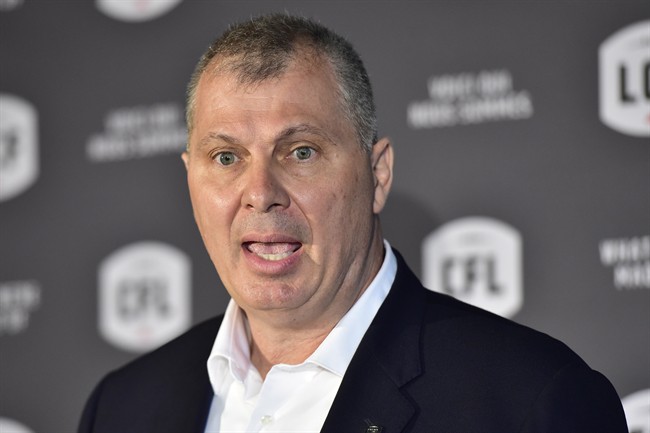 Randy Ambrosie speaks during a press conference in Toronto, Wednesday July 5, 2017. The CFL says Ambrosie will serve as the 14th commissioner in league history. (THE CANADIAN PRESS/Frank Gunn)

A former University of Manitoba Bisons athlete has been named the 14th commissioner of the Canadian Football League.

Randy Ambrosie, 54, was announced Wednesday during a news conference in Toronto. Jeffrey Orridge stepped down as commissioner last month after about two years on the job.

Ambrosie, a Winnipeg native, went on to play nine seasons in the CFL and also served with the CFL Players’ Association.

“Randy has been a great alumnus and a true friend to the Bison Football program,” said Bison football head coach Brian Dobie.

“I appreciate this opportunity to speak on behalf of many players and staff who have been part of Bison Football that we are all so proud and happy for him as he begins his new role as commissioner of the CFL. Randy is a true Manitoban who has always embraced his roots here and at the University of Manitoba.”