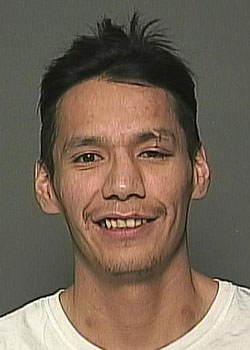 Winnipeg police are asking for the public’s help finding Leon Edward Patchinose, 29, who is wanted for Manslaughter. (WPS/HANDOUT)

Winnipeg police are asking for the public’s help tracking down a second suspect in connection to the shooting death of a man in the North End earlier this summer.

William George Sumner, 27, was shot with a handgun in a home in the 600 block of Pritchard Avenue after police say he got into an argument with an adult male suspect and his associates June 18.

Sumner was rushed to hospital where he later died.

With help from the Tactical Support Team and ARV1, police arrested Cameron Bounthieng Kinnavanthong, 32, at a home in the 1800 block of Logan Avenue June 22. He is charged with Second Degree Murder and numerous weapons-related offences.

Police are now looking for Leon Edward Patchinose, 29, who is wanted for Manslaughter in connection to Sumner’s death.

Patchinose is described as Aboriginal, 6’4” tall and 150 lbs.

Police warn Patchinose is not to be approached.