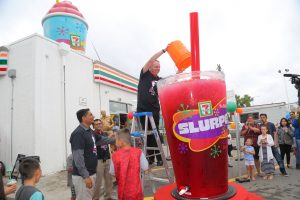 Manitobans are still the best in the world at Slurpee slurping.

For the 18th year in a row our uncanny ability to continually drink Slurpees—even during the coldest days of winter—has led 7-Elven to once again crown Manitoba the official Slurpee Capital of the World.

“Manitobans again prove to have a very special sense of Slurpee pride retaining the top spot over other popular Slurpee drinking markets, including Edmonton and Calgary,” reads a release from 7-Eleven. “Manitobans have again demonstrated their unparalleled passion for Slurpee when it comes to consuming the highest number of Slurpee drinks in the world.”

On display during the celebrations was the world’s largest Slurpee cup, filled with 711 litres of Slurpee.