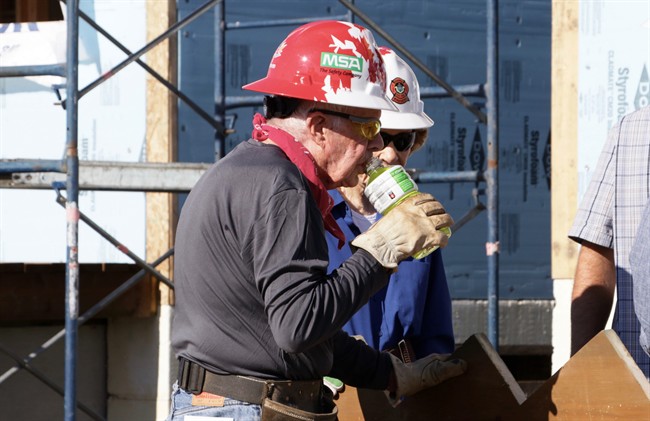 WINNIPEG – Former United States president Jimmy Carter was taken to hospital Thursday after he became dehydrated while volunteering with Habitat for Humanity, an international home-building charity he has supported for decades.

Carter, 92, was helping with a project in Winnipeg and was building a set of stairs along with other volunteers when he began to feel weak after two hours in the sun.

“He had just said that he needed to take a break and so he sat down — there was a chair that was close to him,” said Manitoba Families Minister Scott Fielding, one of the volunteers.

“He sat down there and his secret security were there as well. They hydrated him, giving him some water and some Gatorade.”

Carter required assistance to walk to a nearby trailer and was taken soon afterward by ambulance across town to St. Boniface General Hospital.

“We were out in the hot sun, and you’re doing a lot of work. No matter what age you are, you’re going to get dehydrated,” Fielding said.

The chief executive officer of Habitat for Humanity International said Carter received medical attention as a precaution, but was fine.

“He has been taken off-site for observation. He encourages everyone to stay hydrated and to keep building,” Jonathan Reckford said.

Carter was in Edmonton earlier this week helping Habitat For Humanity, which builds affordable housing for low-income earners.

Carter served as U.S. president from 1977 to 1981. He was diagnosed with melanoma in 2015 and was treated with an immunotherapy drug. He said months later medical scans no longer showed any cancer.

His wife, Rosalynn, was with him at the project Thursday and by his side at the hospital. The St. Boniface General Hospital Research Foundation gave its annual International Award to her in 1979 when she was first lady. The award, which pays tribute to medical and humanitarian efforts, has in other years been given to people such as Mother Teresa and basketball star Steve Nash.

In an interview with The Canadian Press earlier this week, the former president said that Canadian governments should consider emulating the non-profit group he has promoted for years as a way to alleviate an affordable housing crunch in this country.

He pointed out that other countries such as Peru have adopted similar models to help build more affordable housing units and reduce reliance on the social safety net.

He acknowledged the housing challenge remains a difficult one to tackle for policy-makers and volunteers.

“What the local, state and federal government do, and what volunteers like we do … makes a big dent in the need, but it’s still not enough,” he said.

Habitat for Humanity is building 150 homes across Canada this year to mark the country’s sesquicentennial.