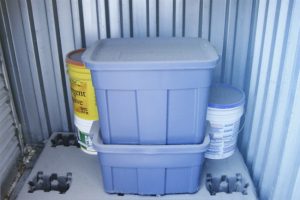 An evidence photo from April 18, 2016 in Winnipeg, presented by the prosecution in the trial of Andrea Giesbrecht case on Monday July 18, 2016 is shown in this handout photo. Description on photo: 129. (Sentinel Storage Facility/THE CANADIAN PRESS/HO)

A Manitoba woman has been sent to prison for hiding the remains of six infants in a rented storage locker, but court never heard an explanation as to what prompted her to hide the babies she conceived over many years.

Andrea Giesbrecht, 43, bit her lip and looked straight ahead, but showed little emotion as she was sentenced Friday to 8 1/2 years.

Provincial court Judge Murray Thompson said Giesbrecht’s moral culpability was extreme and the sentence needed to be strong enough to denounce her behaviour.

“These were newly delivered infants, our most vulnerable,” Thompson said in his decision that was livestreamed by Winnipeg media.

“She knew she had medical options and chose not to access them.”

Giesbrecht did not testify at her trial and did not speak directly to the court on Friday. Her lawyer, Greg Brodsky, told the judge that Giesbrecht is unhappy for the trouble she’s caused and is upset about not being able to see her two children.

The only insight into her motivation came from Brodsky who said outside court that his client was saving the remains. He noted she could have taken other measures if she wanted to simply dispose of them.

“She rented a locker. She didn’t throw it in a landfill dump. She didn’t … put it in a garbage bin.”

The trial heard Giesbrecht put the remains in plastic bags and containers inside a U-haul storage locker. They were discovered by workers who opened the locker in October 2014 after Giesbrecht fell behind on her payments.

Medical experts testified the infants were Giesbrecht’s and were likely to have been born alive, but the remains were too decomposed to determine how they died.

The trial was also told she made efforts to hide her pregnancies from everyone, including her husband, who sat in the back of the courtroom Friday.

“She bagged each of the bodies, sealed them or encased them in cement or powder, all in an effort to contain the smell of human decomposition and decay,” Thompson said in his decision.

“Giesbrecht knew these children were likely to have been born alive and she wished to conceal the fact of their delivery and existence.”

Giesbrecht was convicted earlier this year on six counts of concealing the dead body of a child. Thompson said the Criminal Code section against such an offence is to ensure deaths of newborns can be investigated.

“By her own hand, Giesbrecht has effectively made it impossible for the state to verify if death preceded live birth.”

The Crown had asked for a sentence of 11 years minus time served, while Brodsky had argued that his client should not serve any more time beyond the 168 days she spent in custody following her arrest.

Brodsky said he is eyeing an appeal.

“I’m going to recommend an appeal, but whether we go ahead or not will be dependent on further review of the judge’s decision.”

Earlier in the week, Brodsky filed a motion to have the conviction thrown out and the case dismissed because it took too long to conclude, but Thompson rejected that application.

‘Raising the spectre for a motion of unreasonable delay … when a conviction was entered months ago and sentencing dates have been set for months … is unacceptable,” the judge said.