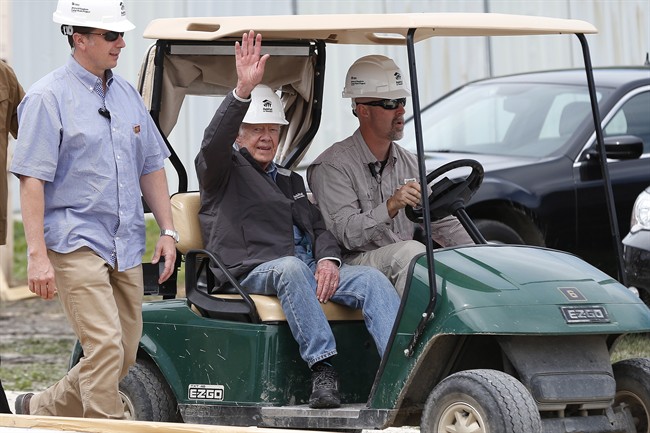 Former US president Jimmy Carter waves to assembled crowd members as he returns to a Habitat for Humanity build site for a press conference in Winnipeg, Friday, July 14, 2017. President Carter was not feeling well and had to leave the site yesterday. He was hospitalized for dehydration and returned to the site today. (THE CANADIAN PRESS/John Woods)

Former United States president Jimmy Carter has been released from a Winnipeg hospital a day after he became dehydrated while volunteering with a Habitat for Humanity home-building event in the city.

A statement from the Habitat organization says Carter, who is 92, was released this morning and attended the daily devotional at the build site.

Carter was helping to construct a set of stairs Thursday morning when he began to feel weak after two hours in the sun.

He required assistance to walk to a nearby trailer and was taken soon afterward by ambulance across town to St. Boniface General Hospital.

Jonathan Reckford, chief executive officer of Habitat for Humanity International, said at the time that the former president received medical attention as a precaution, but was fine.

Carter, who served as president from 1977 to 1981, was in Edmonton earlier this week helping Habitat, which builds affordable housing for low-income earners.