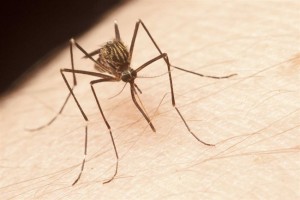 A female aedes japonicus mosquito is seen biting a person in this May 2015 handout photograph. Aedes japonicus is a disease-carrying mosquito which has just been confirmed present in Western Canada. (THE CANADIAN PRESS/HO-Sean McCann)

Mosquitoes infected with the West Nile virus have been found in Manitoba, including in Winnipeg.

The province’s mosquito surveillance program found the season’s first infected Culex tarsalis mosquitoes in adult mosquito traps set in both Altona and Winnipeg during the first week of July, according to a release from the province Friday.

At this time no human cases of West Nile virus have been identified in Manitoba.

The potential for human exposure to infected Culex tarsalis mosquitoes is present throughout southern Manitoba, and the risk of exposure to WNV is expected to continue in the coming weeks, particularly if conditions are warm and dry, according to the release.

There are currently no orders for adult mosquito control in the province.

The province is encouraging Manitobans to help stop the spread of mosquitoes by eliminating standing water around their homes, and to reduce their risk of mosquito bites and exposure to West Nile by using mosquito repellent, wearing light-coloured, loose-fitting clothing, and reducing the amount of time spent outdoors during peak mosquito hours between dusk and dawn.

The province will continue to provide information on the risk of West Nile virus throughout the summer.