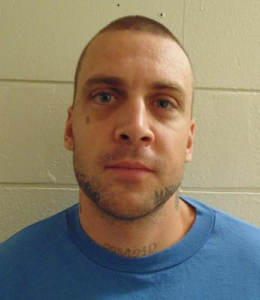 Police have released a photo of a man wanted for a long list of drug and weapons offences after a suspect police say was caught carrying a bag full of drugs slipped free from arresting officers Monday.

Police noticed the suspect in a taxi in the 700 block of Redwood Avenue around 9:30 a.m. Monday.

While officers conducted a traffic stop the man got out of the cab and ran towards a nearby home. An officer chased the man and tried to place him under arrest, but police say the suspect pulled away and during the scuffle the officer was splashed with hot coffee and pushed down a set of stairs.

While the struggle continued police say a loaded gun and handcuffs fell out of a bag the suspect had been carrying. Police say the man then tried to pass a purse to a woman who had exited a nearby home.

The suspect was able to break free and flee, and the woman was taken into custody.

Inside the purse police say they found crack cocaine, methamphetamine, heroin, and a substance believed to be fentanyl. Police estimate the total value of the drugs at $11,500.

Lyric Charisse Laye, a 25-year-old woman from Selkirk, has been charged with a number of firearm and drug-related offences, as well as obstructing a peace officer.

Winnipeg police are now asking for the public’s help tracking down Dallas Tyler Friesen, 33, of Winnipeg.

Friesen is described as a white male standing 6’1” tall, weighing roughly 231 lbs, with a medium build. He has brown hair and blue eyes.

Police advise not to approach Friesen under any circumstances, and to call 911 if he is observed or his whereabouts are known.

Members of the Organized Crime Unit are continuing to investigate and anyone with information on Friesen is asked to call police at 204-986-6222 or Crime Stoppers at 204-786-TIPS.