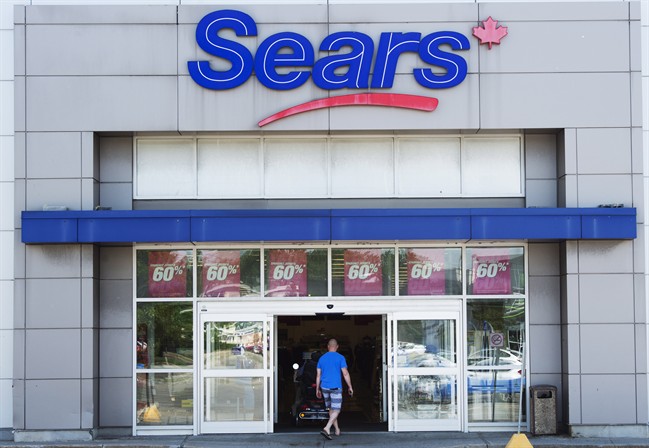 A Sears Canada outlet is seen Tuesday, June 13, 2017 in Saint-Eustache, Quebec. The retailer has warned Tuesday there are doubts about its ability to continue operating, and says it may have to restructure or be sold. (THE CANADIAN PRESS/Ryan Remiorz)

NEEPAWA, Man. — Rural Canadian shoppers may see some changes in their retail landscape. On June 22, Sears Canada filed for bankruptcy. This isn’t necessarily the end though, the once storied retailer said it expects to remain in business, restructure and come out of bankruptcy protection later this year. In its filing, the company said it needed time to let the impact of changes made earlier this year take effect. They were given 30 days of protection from creditors.

In the wake of the filing, the company announced further restructuring, which included closing 59 of its 255 stores, 20 of which are large department stores, and letting go of 2,900 employees.

While the decline of the company is sad for shoppers who remember the company’s glory days, it has brought the issue of workers’ rights to the forefront.

The filing included details about the company’s “key employment retention plan,” which outlined how they would keep senior management and other critical staff and ensure that they are “properly compensated.” But others won’t be so lucky.

First, the company announced that it would not be able to pay severances to those laid off as part of the restructuring. Tough luck for some long-term employees who find themselves suddenly without a job, or safety net.

Second, the company also outlined plans to ask for court approval to stop making special payments under the company’s defined benefit pension plan. To correct the plan’s deficit, the company has to make monthly special payments of $3.7 million, something the chief financial officer said the company can no longer afford. They have also asked court permission to suspend the $1 million a month they were paying to cover employees’ post-retirement health, dental and life insurance benefits.

Many people are surprised to know how low pensioners stand when it comes to bankruptcy. In Canada, pension holders are considered unsecured creditors, which means that pensioners in underfunded plans stand behind secured creditors when it comes to getting paid. This is because once a company files for protection, the lenders who loan the struggling companies money for their last ditch efforts will usually only do so with a court-ordered guarantee that they will be repaid first. This ranking was upheld by the Supreme Court in 2013.

While there is some hope for a turn around, past actions don’t paint a promising picture. In 2013, the company generated $715 million in cash by selling off the leases on its best store locations and its stake in eight Quebec malls. The money wasn’t used to modernize its bricks and mortar stores or make its e-commerce site more competitive, instead, the company issued a $5-per-share special divided. The payment totalled $509 million and majority shareholder Edward S. Lampert received half of it.

Lampert, a billionaire hedge fund manager, personally owns 45 percent of Sears Canada, while US-based Sears Holdings, which is also controlled by Lampert, owns another 12 percent. Mark Cohen, a former Sears Canada CEO, said of Lampert in the New York Times, “His reputation in the retail industry is that he’s a financial pirate.”

Canadian corporate history is full of employees with underfunded pension plans who have seen their pensions cut by bankruptcy. If Sears Canada is unable to restructure its operation or find a buyer, its employees will join this list. This case proves once again that its time to re-evaluate how effectively workers’ investments are being protected. Pension benefits, in particular, represent deferred payment for work already completed by employees, who in most cases, have little control over the financial decisions made by executives or owners. Workers can be protected by pension funds that are held by third parties and appropriately funded by both sides, it’s time for companies to be punished for using their pension funds as a piggy bank, instead of just the employees bearing the brunt of the costs.