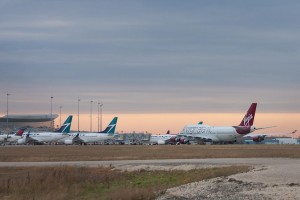 Unionized workers employed by the Winnipeg Airports Authority (WAA) have voted in favour of striking if mediation between the workers and their employer fall apart later this week.

The two sides are currently in last ditch mediation talks with the assistance of a federally-appointed mediator and the vote by workers means employees will be in a position to strike as of 12:01 a.m. the morning of Saturday, July 22, if an agreement can’t be reached.

A release from the Public Service Alliance of Canada (PSAC) sent to media Tuesday says that deadline can be extended as needed, if talks remain productive.

“The vote result once again proves our members’ commitment to stop this employer’s practice of contracting out and to achieve a fair collective agreement,” said Marianne Hladun, Regional Executive Vice-President, PSAC Prairies, in the release. “Our members have strong views about contracting out and understand first-hand how it undermines workplace safety and morale.”