Review: ‘The Trump Card’ at the Winnipeg Fringe Theatre Festival 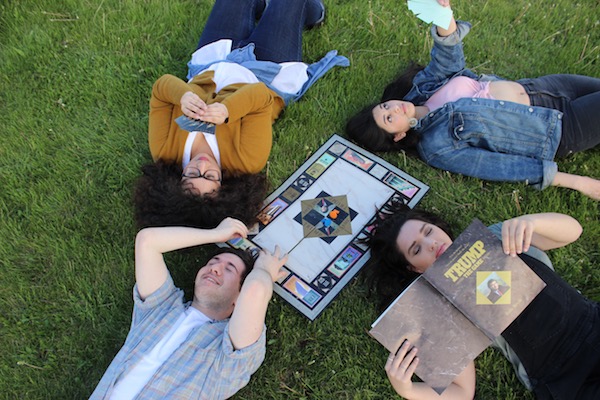 I believe in theatre, and art, as a form of escapism. When I go to the theatre, I want to be entertained. I want to check my troubles at the door and forget about my life for a little while. So why on earth would I choose to go to a show about Donald Trump?

Known for helping theatre nerds in the city unite (see monthly show tune-singalong-get-together Sing Out Louise!) and pushing the boundaries of the absurd (see last year’s Mr. Burns: A Post-Electric Play), District Theatre Collective always brings something new to the table. Plus, in the Winnipeg Fringe Theatre Festival program, instead of choosing categories like “drama” or “comedy,” The Trump Card is classified as “unclassifiable.” How could I not see it?

What I was expecting was not what I got. I expected something insane and flashy, like the opera of biblical scale in the second act of Mr. Burns, but instead, I got an acted-out Wikipedia page.

Don’t get me wrong: it’s a funny Wikipedia page. It’s witty. It’s vulgar, which usually pays off. But often, the cast takes turns shouting the history of Donald Trump at the audience or attempting to explain complicated concepts of poverty that belong in the curriculum of an undergrad sociology class. The highlight of its five-actor cast is District co-founder Connie Manfredi, whose presence is so hilarious and joyful that you miss her when she’s not onstage.

Trump’s history is intersected with monologues from the cast’s personal lives. They are supposed to show that even as non-Americans, we are all affected by Trump or Trump-like people, but I was left wishing that they had been left out. If I had been in the mood for a touching personal show, I would have seen one. They didn’t make me care about their personal sob stories.

The show is essentially the rise of Trump, from his family’s immigration to the United States to the presidency, all told against the backdrop of Trump: The Game. The game’s rules are read aloud as the scenes change.

The play does not touch anything past winning the election, and perhaps it’s best it doesn’t go there. This work is rather elitist. It’s very easy for friendly, welcoming Canadians to point a finger at the garbage fire that is the current state of U.S. politics, but had it turned its head to any issues that had arisen post-inauguration, it would be unjust to not also look at our own. If they had brought up the travel ban, how can we not bring up our own head taxes? How can we not bring up Shoal Lake? How can we not bring up that we continue to rip land and culture away from Indigenous people with each day that passes?

The show makes one attempt to show a person who didn’t vote for either major candidate, and I wish I had seen more of that. The problem with our countries — both of them — is that we refuse to listen to sides other than our own. Why do some continue to resign the Trump voter to an illiterate hillbilly when we personally know people that would’ve voted for him?

People dislike Trump because he’s a bully. But if we continue to point the finger, are we any better? If you’re interested in picking at that scab, this might be the show for you.

The Trump Card and the Winnipeg Fringe Theatre Festival are on now until July 30. For ticket information, show times, and a venue map, visit WinnipegFringe.com.