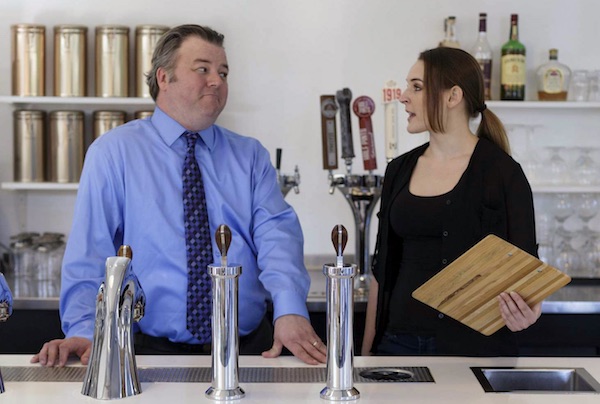 Use your best Stefon voice and say it with me: Immersive sets are the hottest thing right now. There’s an Off-Broadway production of Sweeney Todd that takes place in a pie shop, and the Broadway production of Once had a functioning bar that was open to audience members before the show and during intermission (hint, hint, Royal MTC, for your production next year). So, when I heard that Winnipeg theatre vet Cory Wojcik was premiering an original play at Fools & Horses about working at a coffee shop, I was all for it.

This was, by far, my most comfortable Winnipeg Fringe Theatre Festival experience. I sat in a big cozy armchair with a hot green tea beside me in one of the most intimate venues of Fringe — it seats only 50. But being in a room with only that number of people felt like I was eavesdropping on a juicy, private conversation. And it was awesome.

Joe Job is an original work about a teacher, Joe Malone, who quits his job to work a joe job serving joe. Got it. It’s a clever title. The beginning scene shows Joe reprimanding a student, Sam, for bringing a knife to school. She gets kicked out because of him. Five years later, they find themselves working at the same coffee shop.

I have called playwright and actor Wojcik “papa bear” in a past review because he can have a very intimidating presence, especially if his character is angry. In a two-actor play, his opposite has got to be able to go toe-to-toe with him. Ava Darrach-Gagnon was up for the challenge.

I actually found Sam to be so matched perfectly to Joe that she a little abrasive at first. She was very harsh, condescending — I didn’t know whether that was an acting choice or if it was written that way. But as the play went on, I found myself leaning into her character and she opened up more. We saw a more human, more vulnerable side of her. That’s the good stuff.

I was afraid that it would be a stereotypical white-man-saves-troubled-woman story, a modernized version of a damsel in distress. I was happily wrong. It was more a tale of how influencers in our lives will always be influencers, even when they’re no longer authoritative figures. We also impact our influencers, whether we know it or not. It’s about how you need to take care of yourself sometimes – and that might mean putting yourself first, or it might mean connecting with others.

It’s just like what RuPaul says at the end of every episode of RuPaul’s Drag Race: “If you can’t love yourself, how in the hell are you gonna love somebody else? Can I get an ‘amen’ up in here?”

Joe Job and the Winnipeg Fringe Theatre Festival are on now until July 30. For ticket information, show times, and a venue map, visit WinnipegFringe.com.