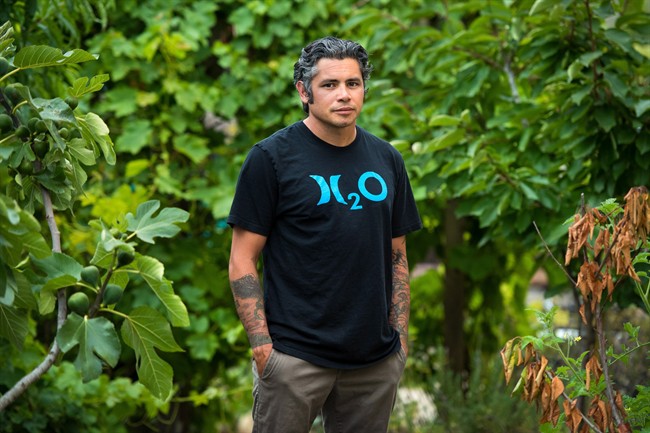 Donnie Bumanglag stands in the backyard garden of his home, Saturday, July 22, 2017, in Lompoc, Calif. Bumanglag is a former U.S. soldier who served in Afghanistan. (THE CANADIAN PRESS/Michael Owen Baker)

TORONTO – ‘This is human life’

For years the battle-hardened and decorated American veteran wrestled with his conscience, with whether he’d done the right thing in saving the life of Omar Khadr, seen by many as a terrorist who profited from his crimes.

Now, watching the furor over the government’s $10.5-million payout to Khadr from afar, Donnie Bumanglag wants to tell his story, offer a perspective born of bitter experience — one he admits may not be popular with many Canadians, or even some of his own former comrades in arms.

Bumanglag, of Lompoc, Calif., 36, has spent years coming to terms with his former life as an elite airborne medic supporting U.S. special forces during three missions to Afghanistan and Iraq. He’s been haunted by flashbacks, frequently thrown back to that time in the summer of 2002, when he spent hours in the back of a helicopter frantically working on Khadr, then 15 years old and at the very edge of death.

“This is a human life. This is war. This is something that most people can’t fathom, and they want to be real quick to give an opinion just because it makes them feel good about themselves,” Bumanglag said. “(But) there’s more to this story than just talking points.”

The following account is based on interviews Bumanglag gave to The Canadian Press, as well as on a recent podcast he co-hosts in which he talks about saving Khadr.

Little guy on a door

Doc Buma, as the 21-year-old Ranger medic was known, was looking forward to leaving the remote area of Afghanistan in which he had been operating for more than a month and heading to Bagram for a shower and some downtime before redeploying to Kandahar.

Instead, as they flew toward Bagram that day in July 2002, a distress call came in. The MH-53 helicopter veered toward Khost and an encounter that would stay with him for years.

Edmund Sealey, then the Rangers platoon sergeant, remembers the call coming in with orders to divert and pick up an “enemy fighter” who had been shot.

“I was on the aircraft. We picked up that casualty in a firefight,” Sealey, 47, now of Columbus, Ga., said from Afghanistan where he still works as a contractor. “With Buma being a Ranger medic, he’s going to assist as soon as you get on board, enemy or friendly, it doesn’t matter.”

With the chopper gunners providing covering fire, they landed in a field. Sealey led the way, Bumanglag behind him, as they threaded their way through a suspected minefield, down a road, and connected with a group of U.S. special forces soldiers.

On what appeared to be a wooden door lay the wounded enemy fighter, shot twice by one of the elite Delta forces. The soldiers had found the casualty barely alive in a compound the Americans had pounded to rubble during a massive assault. One of their own, Sgt. Chris Speer, had been fatally hit by a grenade, and another, Layne Morris, blinded in one eye. It was apparent to the incoming medic that the Delta soldiers were in “some pretty severe distress” over the loss of their comrade.

“There’s a look on somebody’s face when the whole world went to shit 10 minutes ago and it’s too much to process,” Bumanglag says.

As he recalls, the soldiers gave him bare-bones biographical data on the casualty: The fighter had killed Speer. He was a Canadian who had been Osama bin Laden’s “houseboy.” They also told him to keep the high-value detainee alive because he would be a vital source of information and passed him off.

Bumanglag was now charged with saving Khadr, son of a high-ranking member of al-Qaida. He didn’t know Khadr was 15 years old, but his youth struck him.

“I don’t know if I can call him a little kid but he sure looked little to me. He’s 80 pounds or something. He’s a little guy who’s on a door, basically,” Bumanglag says.

They moved the patient up the ramp and the chopper took off. The medic immediately began working to save the boy, who was covered in blood and sand.

“Omar, with gunshot wounds and flex cuffs like an animal had been shot, didn’t look human,” Bumanglag recalls. “But moving in closer and working on him as a patient and seeing the facial features and seeing the skin pigmentation, those images always stuck with me.”

Khadr, it turned out, bore a striking resemblance to one of Bumanglag’s cousins, which bothered the young medic then, and for years after.

As the chopper bobbed and weaved toward Bagram, Doc Buma worked to stabilize his disoriented, barely conscious patient, who was writhing and moaning in pain. At the other soldiers’ insistence, Khadr’s hands remained handcuffed behind his back out of concern he might turn violent.

Bumanglag’s main task was to deal with Khadr’s two gaping bullet exit wounds on his chest. His head raced with thoughts about whether he should save the life of this “terrorist,” whether he’d have enough medical supplies for his own guys should something happen. He even pondered pushing the enemy fighter out the chopper and being done with it.

“He’s rocking his body around everywhere,” he says. “I took it as aggression. You get this idea that everybody is jihad and they’re going to fight to the death.”

Then there was his ego, he admits: the notion that saving this captive would earn him praise, would show he had what it took. So he kept working, trying to staunch the bleeding.

“My mission, my job was just to save him, keep him alive. There was no politics in it then. I was a young Ranger and this was my chance,” Bumanglag says. “I worked on him for over two hours in the back of a helicopter as the sun went down. At the end, I’m working under finger light.”

He kept working, and Khadr kept living, not saying anything, just making noises.

“His body indicated that he was a pretty brave guy. He fought for his life just as much as we fought to save him,” Bumanglag says. “Some people have a will to live and some people don’t. He definitely did.”

They finally touched down at Bagram.

“We plugged all the holes and we tried to keep things viable,” he says. “I pass him off and I don’t know whether he’s going to live or die.”

What he did know was that Khadr hadn’t died on his watch and it was therefore mission accomplished — one for which he would later be commended for by his superiors. It would take another year or so before Bumanglag learned that Khadr had survived.

Things thought about for years

Omar Khadr, born in September 1986 in Toronto spent several months recovering from his wounds at Bagram, where, from the moment he was conscious and able to speak, he underwent what were, by most accounts, some of the harshest interrogations the Americans had devised in the War on Terror.

A few months later, in October 2002, he was transferred to Guantanamo Bay. He had just turned 16.

It was in his early days at the infamous U.S. military prison in Cuba that Canadian intelligence officers went down to interrogate him. The Americans made the interviews conditional on having the information he provided passed on to them. The Canadians also knew the teen had been subjected to the “frequent flyer program,” a brutal process of sleep deprivation designed to soften him up.

Video would surface years later of a weeping teen, now realizing the Canadian agents weren’t there to help him, whimpering for his mother.

Khadr ultimately pleaded guilty to five war crimes in 2010 before a widely discredited military commission. He later disavowed his confession to having killed Speer, saying it was the only way the Americans would return him to Canada, which happened in 2012.

The Supreme Court of Canada ruled that the federal government had violated Khadr’s rights. The ruling underpinned the recent settlement of his lawsuit in which Ottawa apologized to him and, sources said, paid him $10.5 million.

“If you say you’d go through what he went through for $10 million, you’re out of your mind, and that’s the truth,” Bumanglag says.

‘I’m glad I saved his life’

Doc Buma returned to his native California and left the military in 2003. He became a police officer, working anti-narcotics, for almost 10 years. Ultimately, the flashbacks, the post-traumatic stress bested him and he retired as a cop about five years ago. He studied educational psychology, he said, as part of trying to sort himself out.

He took up co-hosting a podcast, Sick Call, in which he and a fellow vet talk about a variety of issues, including topics related to the military and law enforcement. In one recent episode, he talks about Khadr. It’s all part educating others, part therapy for himself, he says.

The years since his days in the military, when he was ready to drop everything at a moment’s notice and heed the call of duty wherever it took him, he says, have afforded him time to grow up, to gain some perspective on war, on his life as a soldier, on demonizing people he has never met or with whom he has no personal quarrel.

“I’ve been on the worst combat missions. I bought into the ideology. Now it’s time for reflection,” he says.

Time and again, he is careful to make clear he intends no disrespect to Speer’s relatives or to Morris and empathizes with what they have lost.

“Omar lost his eye, too. I don’t know how much more symbolic that can be.”

At the same time, he is clear that Speer and Morris were grown men who had signed on the line to become elite professional soldiers, knowing the risks of their jobs.

On the other hand, Bumanglag also makes it clear he empathizes with the young Canadian who was taken by his father to another country and thrown into an ideologically motivated war over which he had no control.

As a married father of four, Bumanglag says it’s naive to believe Khadr could somehow have just walked away from the compound his father had sent him to. More to the point, he says, had he found himself as Khadr did that fateful day in July — under heavy bombardment with the fighting men dead and the enemy closing in for the kill, he likely would not have hesitated to throw a grenade.

“What happens if the shoe is on the other foot? This is the scenario that I’ve played in my head,” Bumanglag says, his mind turning to those who are furious at the Canadian government’s settlement with Khadr.

“They can be upset but the reality is that they don’t understand the full story. I don’t think any of us do.”

Doc Buma says he no longer frets that he should have let Khadr die.

“Everybody may hate him but I’m glad I saved his life,” he says. “It just wasn’t his time then.”