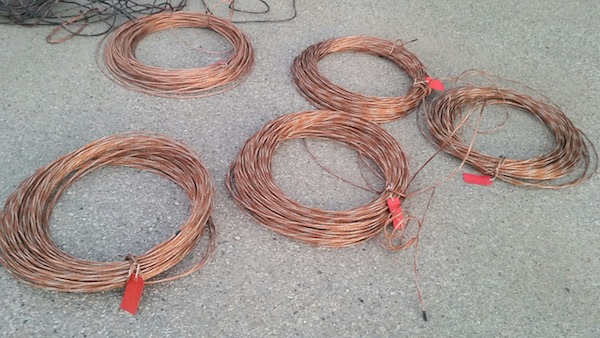 Stolen copper wire was found inside a van travelling through the RM of Headingley, Manitoba on July 26, 2017. (RCMP HANDOUT)

A traffic stop in Headingley, just west of Winnipeg, has turned up a large quantity of stolen copper wire.

RCMP pulled over a vehicle July 26 for erratic driving on the Trans-Canada Highway.

Police noticed the licence plates on the van were not a match to the description of the vehicle and the driver was prohibited from driving.

Officers discovered the van to be full of stolen copper wire. So far this year, there have been 35 reported cases of copped wire theft in Manitoba, which is often sold to scrap metal buyers.

Daniel Panko, 51, and William Beaulieu, 36, both from Swan River have been charged with possession of property obtained by crime.

Panko was also charged with driving while prohibited and remains in custody.