Manitoba Has the Second-Highest Number of VLTs in Canada 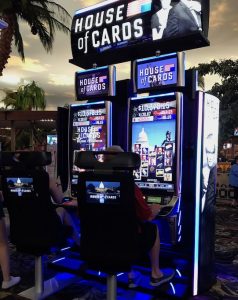 A House of Cards slot machine at Club Regent Casino in Winnipeg. (FILE)

NEEPAWA, Man. — A reader and friend called last week and he was somewhat amazed at how much money gets poured into slot machines in rural towns. That raises the question as to how much do the slot machines return to the winners, to the facility owners and to the government? In 2016, the Town of Neepawa received $57,562.14 which was a $5,000 base fee and the rest on a per capita basis. But that figure pales in comparison to how much money goes out of the community.

That said, I have heard from some legions and hotels that if were not for the VLTs, they would not survive. That is unfortunate on a number of fronts. The VLT money mostly goes to the government. A small percentage gets paid to winners, a small amount to the facility owners and a huge amount to government. A Winnipeg Free Press article in 2016 stated that, “According to Manitoba Liquor and Lotteries’ 2014-15 annual report, VLTs generated $323.5 million in revenue, an increase of $14.2 million or 4.6 percent from the previous year. It contributed to almost 30 per cent of Manitoba Liquor and Lotteries’ net income.

Manitoba has the second-highest number of VLTs in Canada, second only to Quebec, and by far the highest number per capita. There isn’t a lot of benefit to local communities from VLTs when all is said and done.

There are forms of gambling that benefit local communities and organizations in a more meaningful way than VLTs and one is the now popular Chase the Ace events.

Chase the Ace events are popping up all over Canada and for good reasons. CTAs are a social event, they happen regularly and usually involve an evening out and maybe a meal and refreshments. There is an immediate chance to win each night. They are locally run and 50 percent of the income stays with the local group and therefore in the local community. The government only takes one and a half percent of the gross income, which is much less than they extract from the VLTs. The winners are usually local and that money stays in the community as well. Local CTA events have a definite localized social and economic impact.

Some CTA events across Canada have reached huge jack pot amounts. Neepawa has two Chase the Ace events, one at the Neepawa Legion and one held by the Neepawa Natives Hockey Club. The Natives event is held during the summer at the Neepawa Golf course and it has had a definite upswing in business for the golf course on Friday nights. During the hockey season, the Natives CTA is held at the Yellowhead Centre. Both events are growing nicely. The Neepawa CTA events aren’t heavily attended yet but will grow. Both the Neepawa Legion CTA and the Neepawa Natives event would welcome more participants. They’re a good social time and the money raised stays in our home communities.

There are those who choose not to gamble and I totally respect that. For those folks, there are many ways they can contribute to local groups like the legion or the Neepawa Natives hockey club. There are lots of events to attend, lots of volunteer positions to fill.

There is also the all important social aspect of getting out and about. I have received untold comments from people over the years that there is no place to go on a Friday night to have a meal or a snack, to have some refreshments and to just relax and visit. The above-mentioned venues are but two of many places in the Neepawa area to go to have some visiting and some fun. They are both local and the funds raised mostly gets poured back into our community.

Maybe all that money that is swallowed up by the ever hungry VLTs would be better fed into a local CTA event. The government only takes one and a half per cent of CTA events (and local lotteries) instead of the huge bite they take from VLTs. Just saying, folks, just saying.