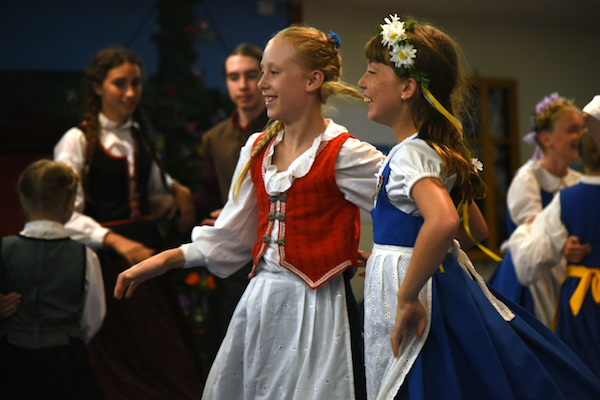 WINNIPEG — One of my oldest and dearest friends is Icelandic, and everyone who knows her knows that. Throughout the years, she’s made us (and made us try) vinaterta, taught us about the many Icelandic versions of Santa (one of whom will leave a potato in your shoe if you’ve been bad), and showed us different significant words from the language. I didn’t know it then, but her kindness and willingness to spread knowledge were a small representation of what the Scandinavian community has to offer.

Folklorama‘s Scandinavian pavilion has plenty of food options to choose from — including a Swedish meatball plate, fish sandwiches, desserts, and what I had — a chicken and asparagus tartarella and the cheese sampler plate. The tartarella was a warm, flaky pastry with a chicken-pot-pie-like mixture of chicken and asparagus poured over top. It was hearty and delicious, but a little messy — make sure you have your napkin on your lap. The cheese sampler was an adventure — it included some that were familiar to me, like Havarti and bleu cheese, but most were very different. Gjetost, a brown, nutty cheese, is served on a heart-shaped waffle. It’s sort of sweet and sort of savoury — like cream cheese on a cinnamon raisin bagel. I also tried skyr, which has the consistency of sour cream, and you pour half-and-half cream and sprinkle raw sugar on top, and eat it with a spoon. This one definitely not as scary as it sounds – it tasted like plain Greek yogurt. It was good with the waffle dipped in it, too.

The half-hour-or-so mainstage show was filled with folk dances from the five different countries represented (Iceland, Denmark, Sweden, Finland, and Norway). The show ends with a sing-a-long of a song that has translated over all the countries, and then you are invited to come dance onstage. I sat contently drinking my Icelandic beer (called Gull, recommended to me by the bartender), until one of the volunteers took my hand and said that someone wearing a Folklorama lanyard has to come up and dance. And so dance the polka with a complete stranger onstage I did — and it was a lot of fun.

Upstairs at the Scandinavian Cultural Centre, each of the countries has its own room full of memorabilia, and each of the volunteers inside leaped to explain every piece of art that we looked at — they are incredibly knowledgeable and friendly and are very willing and able to answer all of your questions. Of special note is the Danish room — there are lots of homemade candies (including one peanut butter-graham cracker delight called a Viking Roll) available for purchase.

Go if: You’re looking for a more intimate experience – a smaller room, friendly volunteers, and the feeling of being a part of a big Scandinavian family.
Avoid if: You have a fear of being onstage – because it might happen to you, too. But it was fun! And never something I would do on my own – that’s what the festival is all about.