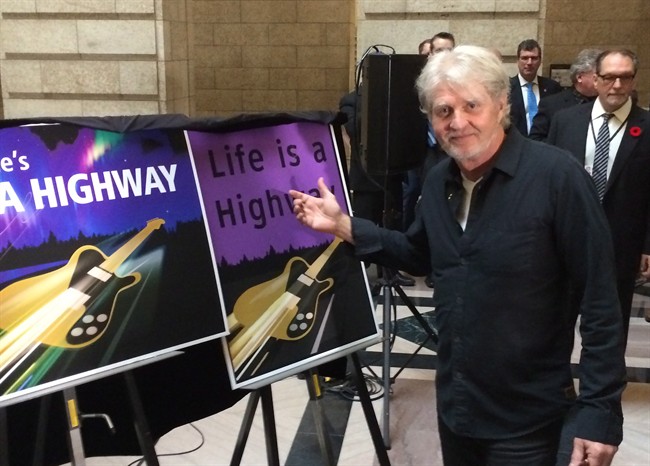 Canadian musician Tom Cochrane was honoured Monday, Oct.31, 2016 at the Manitoba legislature in Winnipeg. A stretch of highway near his hometown of Lynn Lake has been named after Cochrane’s biggest hit, Life Is A Highway. (THE CANADIAN PRESS/Steve Lambert)

Signs along a stretch of Manitoba highway to honour Canadian musician Tom Cochrane were unveiled over the weekend.

“Life Is A Highway” road signs were unveiled in Lynn Lake on Sunday honouring Cochrane, a native of the northern town. The highway signs are along a 322-kilometre section of PR 391 connecting Lynn Lake and Thompson.

The highway designation was announced last fall, but only unveiled now in recognition of the 25th anniversary of the album Mad Mad World, the second solo studio album by Cochrane, originally released in 1991. Life Is A Highway appeared on the album and it reached number one in Canada and number six on the Billboard Hot 100 in the United States.

“Excited to get back to Lynn Lake and honoured to unveil the road sign, play some songs and visit the town I was born in,” Cochrane said in a statement before the event. “I have always been proud of my Lynn Lake heritage. The pioneering independent spirit of Lynn and towns like it in the North help define the spirit of our country profoundly — as resilient and self-reliant as people are, they pull together and support each other as well.”