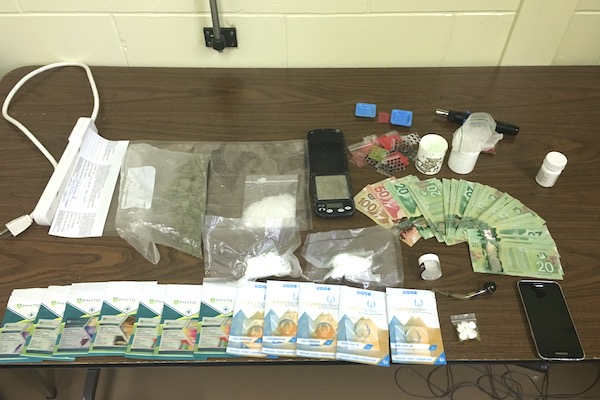 Drugs and cash seized during a traffic stop in Virden, Manitoba on Wednesday, August 23, 2017. (RCMP HANDOUT)

A 31-year-old Virden man has been charged after RCMP in the community pulled him over on Wednesday.

Police searched the man’s pickup truck, where they located more than 75 grams of methamphetamine, 77 grams of cocaine, 27 grams of marijuana, 12 grams of “shatter” and a small quantity of Canadian currency.

Cory Alexander Burke faces four counts of possession for the purpose of trafficking, two counts of failing to comply with an undertaking and one count of possession of proceeds of crime.

Police say Burke was arrested on August 9 when officers executed a search warrant at his home and located methamphetamine, cocaine, marijuana, and a firearm. He was on conditions following his first arrest.

“This is our third significant seizure in the past 30 days” said Cpl. Aaron Bailey with the Westman RCMP detachment. “We will continue to investigate and hold those responsible who traffic illicit drugs in our communities and we continue to request that anyone with information to please contact the Virden RCMP detachment.”

Burke will appear in Brandon court on August 28.