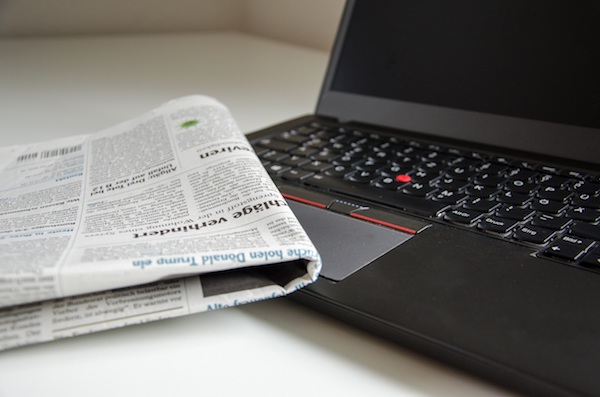 NEEPAWA, Man. — We live in an interesting time for media, it’s certainly one of change. Much as the early printing presses allowed anyone with some space to start their own newspaper, the Internet means that today, anyone with a smartphone can become a media outlet.

The Internet has democratized news, but brought us back to a place that is unfamiliar to many media consumers. If you look at old newspapers, say, those from a century ago, you’ll find many competing outlets offering highly partisan news. But since then, the number of outlets has shrunk, advertising has become more expensive and large advertisers decided they didn’t want to spend large sums of money on partisan news likely to alienate half of their customer base. Coverage moved to the centre, focusing on balance, or at least that was the goal. Many people think this is still where all news lives, they haven’t recognized the paradigm shift, especially when it comes to the wild west of online news.

Do you remember when BuzzFeed was all cat videos and celebrity news? Me too, but in this changing landscape, they are also doing real, legitimate, important news. It was BuzzFeed News Media editor Craig Silverman who broke the story about “Fake News” — the completely fabricated political stories, being written by Macedonian teenagers, that popped up during last year’s presidential election and existed only to cash in on advertising dollars paid by the hit.

But it isn’t just the fabricated news, there’s news outlets all along the spectrum. This is something which most of us raised in an era of news that valued the unbiased above all else are having trouble with. We aren’t accustomed to checking biases and reading critically, to separate the balanced, from the skewed, from the fake.

Silverman and a team from BuzzFeed recently published a report called “Inside the Partisan Fight for your News Feed.” It analyzed 667 partisan websites and 452 associated Facebook pages. The market isn’t just large, it’s growing; in 2016, at least 187 new partisan news websites were launched.

This is important because every day, our Facebook feeds or emails are flooded with news stories shared by friends and family. We aren’t used to the volume of stories or the need to identify biases.

The report makes the point that biases aren’t necessarily bad and that partisan news isn’t necessarily of low quality. While some partisan websites publish stories that have little basis in reality, others are established companies doing top notch reporting, even the kind of stories that win Pulitzer prizes, they just self-identify as having a certain political leaning.

The report also investigated the ownership of many of the most popular partisan sites. As with more traditional forms of media, they aren’t all independent businesses. Instead, many are part of chains and some are part of chains with titles on both sides of the political spectrum. Some of the pages are even run by those outside the country. For example, the site “Conservative Fighters,” which outperforms many other conservative sites, is run by a 20-year-old man in Macedonia.

In my mind, the issue with partisan news is that it amplifies the polarization we are seeing between left and right. Partisan news wouldn’t be such a problem if people were creating their own balance by sampling from both sides, but that doesn’t seem to be happening. For 483 sites, the report looked at upstream traffic, that’s where the readers came from to get to a site, and found that in the vast majority of cases, few readers were crossing between left and right.

It increasingly feels as though we have two sides yelling across the abyss at one another and partisan news, which is rewarded for amplifying the yelling, is doing little to bridge that gap. By all means, read the stories, share them if you want, but, at the end of the day, we have to remember that most of them exist to cash in on outrage, nothing more.