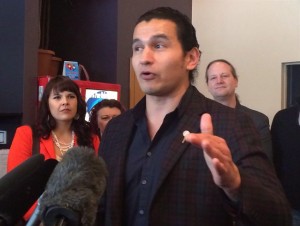 Manitoba NDP leadership candidate Wab Kinew wants to use every dollar collected from a proposed carbon tax to fight the effects of climate change, he said Thursday.

Kinew made the pledge in a news release and outlined his environmental priorities, including developing fully electric public transportation options and investing in energy-efficient housing retrofits.

“The effects of global warming will be serious. Climate change is already affecting Manitobans everyday – from increased flooding, more intense forest fires, and shorter winter road seasons. And we’ve all seen the impacts on Lake Winnipeg, affecting Indigenous communities and fisheries that support local jobs. We must act now to ensure that we protect our lands and waters, and that we do our part to stop global warming,” he said.

The federal government has required all provinces to mandate a carbon tax by the end of 2018.

“Critically, any revenues that are collected under a (carbon) tax must be reinvested to help address global warming – they cannot simply be put into general revenues, or be used to offset PST reductions. Manitobans deserve honesty in government, and we will deliver,” Kinew said.