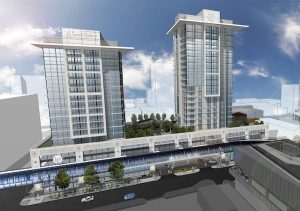 An artist’s rendering of the Sutton Place Hotel to be built in True North Square. TRUE NORTH REAL ESTATE DEVELOPMENT/SUPPLIED

Construction on the second phase of True North Square — including a new hotel, residential tower and steakhouse — will begin in the spring and summer of 2018, developers announced Thursday.

The five-star hotel will boast 18 storeys, 288 rooms and 130 suites at the northwest corner of St. Mary Ave. and Carlton St. Its “old world classic yet modern character…will define the streets’ corner profile and complement the design features of True North Square’s office and residential towers,” True North said in a news release.

The hotel’s main-floor anchor tenant will be Chop Steakhouse & Bar. 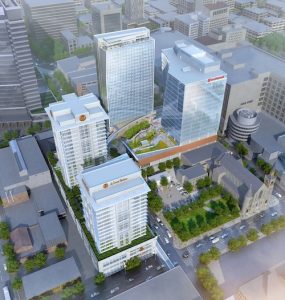 Work on the square’s Carlton and Hargrave towers remains steady, rising by one floor every eight to 10 days and scheduled to top out by mid-November, True North said. According to plans, tenants should start occupying Tower 1 (the first of four) by June 29, 2018.

More announcements on a new food hall market and boutique grocer in the square are expected in the coming months.