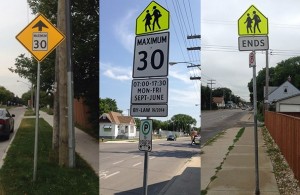 Here’s a reminder to pump the brakes and watch where you park as Winnipeg schools resume their regularly scheduled programming.

On Friday, Sept. 1, speed limits of 30 kilometres per hour return to many school zones.

The Winnipeg Parking Authority (WPA) cautioned drivers to also “Be Aware. Park with Care” around schools.

In May, the WPA began mailing tickets to those stopped in school zones and across fire lines. Since then, more than 1,800 tickets and warnings were sent for violations like stopping or parking illegally, in the wrong direction or on a boulevard.

“Illegally parked vehicles during school pick up and drop offs create serious safety hazards for children and cause traffic delays,” said Ryan Arabsky, the WPA’s manager of regulation and compliance, in a news release.

“As kids start to head back to school, we encourage everyone to be aware and park with care for everyone’s safety with the added bonus of avoiding a ticket.”

For more information on where not to park around school zones and fire lanes, visit winnipeg.ca/parkwithcare.