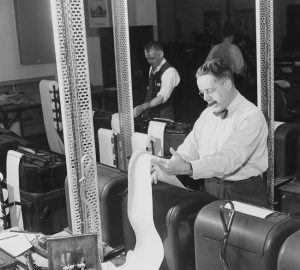 General manager of The Canadian Press Gillis (Gil) Purcell reads news stories off the wire at the news gathering co-operative offices in Toronto in this 1963 file photo. (THE CANADIAN PRESS)

The Canadian Press, the national news service that was created during the First World War to bring home stories from the European front — and went on to become the country’s go-to, real-time source — turned 100 Friday.

But even dedicated news junkies might not know where to send a birthday card.

Described by some scholars as a cornerstone of Canadian history, CP remains a mystery to many, a low-profile but central part of the news landscape. Its news stories, photos, videos and radio broadcasts, in both official languages, appear in almost every media outlet in the country, yet readers or listeners are often unaware of their source.

The agency was established in 1917 by an Act of Parliament, as newspaper publishers looked to share stories across a massive, thinly populated country. With the war raging in Europe, Canadians were hungry to hear about their troops. Coverage of the Canadian military has remained a top priority for CP, the only news outlet to have a reporter stationed in Afghanistan throughout the duration of that conflict.

As it grew into a non-profit co-operative owned collectively by member newspapers across Canada, CP ensured readers received a steady supply of regional, national and international news. In those early days, rewrite desks would transform stories from newspapers into tight wire-service copy. Shorter was better: teletype networks could transmit no more than 66 words a minute, putting a limit on how many stories could move in a day.

“CP was to information what railways were to hard goods in Canada,” said Clark Davey, a former newspaper publisher who served as CP’s president and board chairman from 1981 to 1983.

“If you go back to the days before television, it was an even more vital part of binding the country together in those days, because it allowed you to look in on the rest of the country to start with, in a very, almost intimate way.”

While the service’s co-operative structure made The Canadian Press uniquely positioned to distribute news from every corner of the country, the wire service’s staff reporters provided readers with a front row seat to history.

For the last century, CP journalists have prided themselves on leaping into action at a moment’s notice, racing to disaster sites. They were there at the Springhill Mine tragedy in Nova Scotia, at the Swissair and Air India crashes, Ontario’s Mississauga train derailment and Elliot Lake mall collapse, the Lac-Megantic explosion in Quebec and, just last year, the massive Fort McMurray, Alta., wildfires and the school shooting in La Loche, Sask.

The service’s reporters have typed out lightning-fast missives from three homegrown Olympics, two Quebec referendums, the October Crisis and the stand-off at Oka. Even before the Internet, they provided newsrooms with moment-by-moment coverage of scores of high-profile trials, from Colin Thatcher and Jim Keegstra to Jian Ghomeshi and Paul Bernardo and they’ve written running updates into the wee hours of countless election nights.

“You had to be straight down the line,” said Keith Kincaid, who joined CP as a summer intern in 1957 and eventually moved into the president’s office in 1978. “No editorializing; the facts and that was it.”

Tradition runs deep at the wire service, and today’s reporters have a deep understanding and appreciation of the storied scribes who came before.

The Second World War, for example, brought CP to the forefront of Canadian journalism with the work of Ross Munro, arguably one of the country’s greatest war correspondents.

Munro’s coverage of the ill-fated Dieppe Raid in 1942 was the stuff of legend. He landed with the troops under a hail of fire, soldiers dying around him. He made it back to Britain on one of the last boats and wrote for days, fending off exhaustion with Benzedrine, an early amphetamine.

“For eight raging hours, under intense Nazi fire from dawn into a sweltering afternoon, I watched Canadian troops fight the blazing, bloody battle of Dieppe,” reads Munro’s first grim dispatch, published in both Canada and the United States.

The war also marked the rise of another CP legend, Gillis (Gil) Purcell, who was second-in-command of the company for 13 years and general manager from 1945 to 1969.

On Purcell’s watch, a French-language service was established in 1951 and wirephotos — pictures transmitted by telephone circuits — were added the following year. A broadcast news service for radio stations was set up in 1954. Today, CP’s copy is also relied upon by newspapers across the country.

Technological change took hold in the 1970s, as typewriters gave way to early computer systems. In the 1980s, CP switched from landlines to satellite delivery, and in 1997 began migrating operations to the Internet.

From there, change has come at warp speed. In 2007 the agency began producing news videos for newspaper websites, portals and other websites. These days, CP is a full multimedia service: digital tools such as interactive graphics, live-blogs and Storifys are as much a part of a reporter’s arsenal as pen and paper.

Good writing has remained paramount. The CP Stylebook continues to be an invaluable resource for newsrooms and many universities and colleges across the country, as well as a hallmark of the company’s commitment to journalistic integrity and quality.

Purcell placed his indelible stamp on the company with the 1940 CP Stylebook, which not only prescribed how best to handle and write news, but also laid out the company’s raison d’etre: “Unbiased, fearless recording of actualities is sought,” the book’s original edition reads. “Conflicting sides are accorded the same objective treatment. Correctness of statement so far as humanly possible is another fundamental.”

The media landscape has been rocked by unprecedented change in recent years and CP has not been immune.

As the century came to a close, newspaper revenues were plummeting. CP editorial staff levels, which hit 407 in the early 1980s, fell to 270 in 1996 – still well above the current 190. Disagreements among the member papers and the powerful newspaper groups came to a head. The agency, again seemingly again on the brink of extinction, was saved at the last minute by a restructuring plan.

Another sea change came in 2010 when a trio of newspaper owners — Montreal’s Gesca Ltee, Torstar Corp. and the Globe and Mail — jointly invested in a newly established, for-profit entity, Canadian Press Enterprises Inc., ending CP’s days as a co-operative.

The service is no longer a vehicle for sharing content among members. Instead, its nearly 200 journalists in bureaus across the country and in Washington produce original journalism in multiple formats which is sold to clients.

But some things never change. An unyielding commitment to journalism, irrespective of accolades, is bred in the bone at CP, say those who know it best.

So too, it seems, is an ineffable instinct for survival.

“News agencies are a deadline-every-minute business,” says Gene Allen, a journalism professor at Toronto’s Ryerson University and author of the 2013 book “Making National News: A History of Canadian Press.”

“In the world of the Internet and especially now mobile, a deadline-every-minute approach is much more suitable … so CP also has that as part of its institutional DNA. That, I think, is useful in the current environment.”