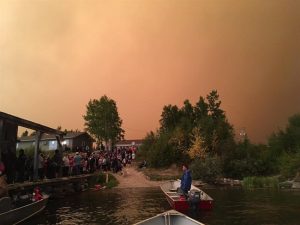 As thousands are forced to leave their homes in Northern First Nations affected by wildfires, the Canadian Red Cross has opted to open a second emergency shelter in Winnipeg, this time at a soccer complex.

The Canadian Red Cross is fully evacuating the area around the three First Nations — about 3,700 people — due to health concerns surrounding the heavy smoke and fire.

On Tuesday and Wednesday, evacuees were sent to hotels in Winnipeg and Brandon. When space was no longer available, the Red Cross began looking for other temporary venues to set up cots with help from the City of Winnipeg.

More than 1,000 cots were made available in the Convention Centre Thursday. The soccer centre, where evacuees began arriving Friday morning, will house up to 900 more.

“The Canadian Red Cross wants to thank the City of Winnipeg and the Winnipeg Soccer Federation to help us quickly identify a location for a shelter for people who need a place to stay,” said Shawn Feely, the vice-president of Canadian Red Cross representing Manitoba and Nunavut.

“Our team is working with the city, the federation and the community to ensure the evacuees get the support they need at the shelter.”

The weather is providing some help to crews battling the large forest fire. The Manitoba government says strong south winds are pushing the smoke away from Wasagamack First Nation. There is also rain in the forecast for the first time in days.

The fire is still about one kilometre from the community and crews are working to keep it from advancing.

-Staff, with files from The Canadian Press