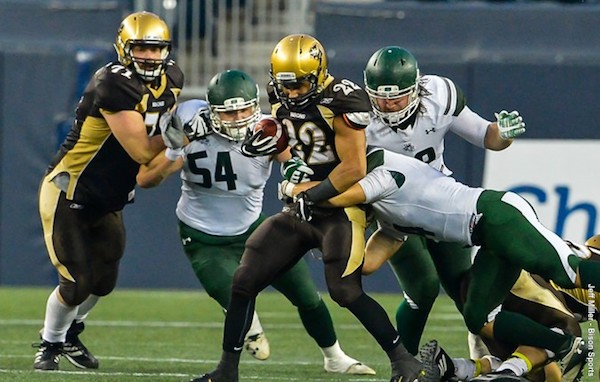 WINNIPEG – Now that is a way to get your first Canadian university football coaching win. First-year football head coach of the Saskatchewan Huskies Scott Flory was dumped with Gatorade after leading the unranked Huskies to a road upset 44-23 win over #10 ranked Manitoba Bisons at Investors Group Field on Friday, September 1 afternoon in front of 1,501 fans.

This was the first Canada West game of the 2017 season for both teams.

The road team had a quick and strong first half as they stormed to a 27-6 lead led by two Kyle Siemens touchdown passes (28, 16 yards) and another 10 yard TD run also by the fourth year Huskies pivot.

Manitoba looked for the rally after the break and scored 17 unanswered points in the third quarter when second year running back and 2015 Canada West Rookie of the Year made his return to U SPORTS football with a four your touchdown run and followed by fourth year Shai Ross grabbing a 30 yard TD pass from fourth year QB Theo Deezar. Brad Mikoluff finished the third quarter scoring with a 46-yard field goal.

Just as Manitoba look to have all the momentum heading into the fourth, the Huskies snuffed it out with a 2-and-out and then a drive early in the 4th finished by a Sean Stenger 22-yard field goal. Then the Herd stalled on the next drive and the visitors took back control of the contest with a quick six play, 56-yard drive that ended with fifth-year receiver Evan Kopchynski catching a 16 yard TD with under five minutes to play. Saskatchewan then salted away the game. After a 51 yard fumble recovery, set-up a fourth TD pass by Siemens to Chad Braun and the Huskies gave Flory his first U SPORTS victory with a 44-23 result.

Saskatchewan also has a new offensive coordinator and former CFL quarterback Marcus Crandell and that unit was clicking by racking up 33 first downs, 563 total offence and 34:15 time of possession with no turnovers.

For Manitoba, Deezar was 18-31 for 215 yards and 1 TD and 1 INT while Lyles had 16 carries for 81 yards and 1 rush TD. Ross was leading receiver with 74 yards on five grabs and Mikoluff was 3-3 in the field goal department. Second year defensive lineman Brock Gowanlock had a game-high nine tackles along with one sack and fifth year linebacker James Mau had 6.5 tackles in the loss.

“Saskatchewan played really well except in the third,” stated Bison Football head coach Brian Dobie after the defeat. “It felt like we were in practice mode. It didn’t feel like we were ready. We are ultimately responsible for preparations and must get better.”

Both teams get right back at it for game two. Saskatchewan returns home for their annual Homecoming Game versus Alberta Golden Bears (0-1) on Friday, September 8 at 7 p.m. MT. Manitoba travels to play at the UBC Thunderbirds (0-1) on Saturday, September 9 at 1 p.m. PT.

Game Notes: Manitoba defeated the Huskies in 2016 at home by a 38-17 score and now with this 2017 result, the Bisons lead Saskatchewan by a 16-15 margin during Brian Dobie’s tenure during the last 22 seasons.
Manitoba has now lost the last three home openers at Investors Group Field after starting the first two seasons in the new stadiums with wins.