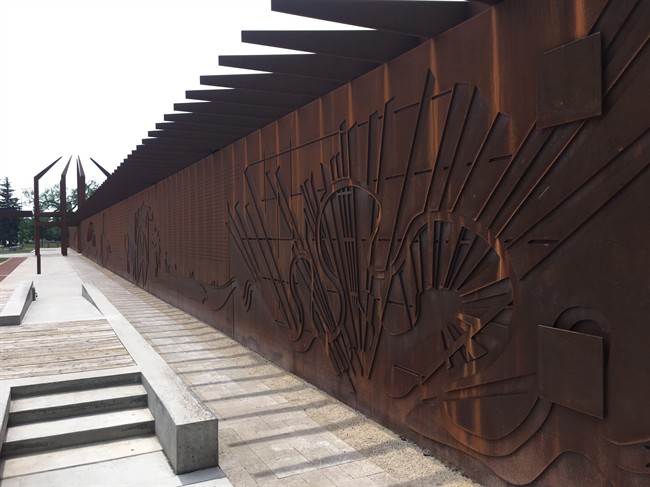 The Heritage Wall at Upper Fort Garry Provincial Park in Winnipeg on Monday, June 26, 2017. Every 15 minutes, a sound-and-light show begins that outlines the history of the area, moving left-to-right along the 134-metre long wall. (THE CANADIAN PRESS/Steve Lambert)

WINNIPEG – Talk about doing a lot with a little.

Sandwiched between one of Winnipeg’s busiest streets and a collection of apartment towers, Upper Fort Garry Provincial Park capitalizes on what very little is left of the original 19th-century fort to recreate the atmosphere of a key time and place in Canadian history.

This is where Louis Riel led the Red River Rebellion at the end of the 1860s, where Riel’s men shot Thomas Scott — a prisoner who repeatedly threatened to assassinate Riel — and where the move was made to have Manitoba become the first western province to join Confederation in 1870.

“We call it arguably the most historic site in Western Canada,” says Jerry Gray, chairman of the non-profit group that has developed the site.

Forts had come and gone in the same general area — a traditional meeting place for First Nations at the junction of the Red and Assiniboine rivers that became the hub of the region’s fur trade. Many were damaged by flooding. In 1835, the new fort with stone walls was built. It provided 6,200 square metres of shelter (later expanded slightly) on land open to the harsh elements.

“If you stood inside the fort on the west wall, and looked over the wall, all you would have seen was prairie grass as far as the eye could see,” Gray says.

“It was a very isolated fort in the sense that there wasn’t very much around it.”

The Metis seized the fort in 1869 and established a provisional government that would lead to Manitoba’s entry into Confederation. The following year, Riel fled when a military expedition took over the fort.

A few years later, as Winnipeg grew all around the site, the fort was sold and its buildings and walls were demolished, save for the north gate. The southeast section of the fort is now an eight-lane-wide section of Main Street.

The north gate stands as a solitary physical throwback to the era — a combination of stone and wood that is in stark contrast to the modern buildings outside the park — and a good entrance point for visitors.

To make up for what was demolished, park officials have installed plinths — raised sections of stone that mark the locations of the foundations of officers’ quarters, general stores and other buildings that used to occupy the site.

Panels and plaques throughout the site describe the former buildings, and visitors can use a free app for mobile phones to get more detailed information about each structure.

The most remarkable display at the site is the Heritage Wall — a 134-metre-long digital steel-and-light installation that marks where the fort’s west wall once stood. Every 15 minutes or so, a light-and-sound show fires up and traces the history of the area. Using 9,000 LED lights, the show moves from left to right, starting with a depiction of a Metis buffalo hunt and ending with the growth of the City of Winnipeg.

It’s best to stand back a ways.

“The show goes along the entire length of the wall. It’s a moving thing as opposed to a static thing, and there’s 18-channel sound that follows the movement along the wall,” Gray says.

“I think if you’re standing next to the wall, the ground shakes a bit,” he adds with a chuckle.

The park opened in 2015 and is still something of a work in progress. Funds are being raised for an indoor visitors’ centre to add to what is now essentially an open square city block.

The site does not require more than an hour or so to visit, and is a short walk away from other recently built tourist attractions, including the Canadian Museum for Human Rights.

— Upper Fort Garry Provincial Park is located at the south end of downtown Winnipeg, near the corner of Main Street and Broadway.

— Admission is free and the park can be accessed by many points along surrounding streets.

— Further information is at UpperFortGarry.com and the park’s guide app can be downloaded for free through the iTunes store or Google Play.