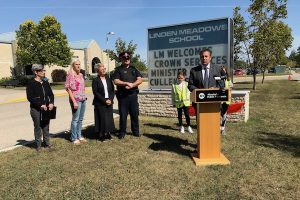 WINNIPEG — Police agencies across the province are beefing up speed enforcement in school zones throughout Manitoba.

As kids head back to the classroom, seven police agencies will be increasing patrols during the month of September through renewed funding from Manitoba Public Insurance.

It’s the fifth year the enhanced school zone safety project has been running, meant to ticket drivers who travel beyond 30 km/h in designated school zones during the posted sign hours.

“Combining enhanced public awareness about school zone safety with the high visibility of police enforcement serves as a reminder to all motorists to slow down and drive with caution in school zones,” said Cliff Cullen, Minister of Crown Services.

“The ultimate goal of these road safety partnerships is to enhance safety for students as they start another school year and travel back and forth to school daily.”