Campaign Blows Smoke at Drugs and Driving Ahead of Legal Marijuana 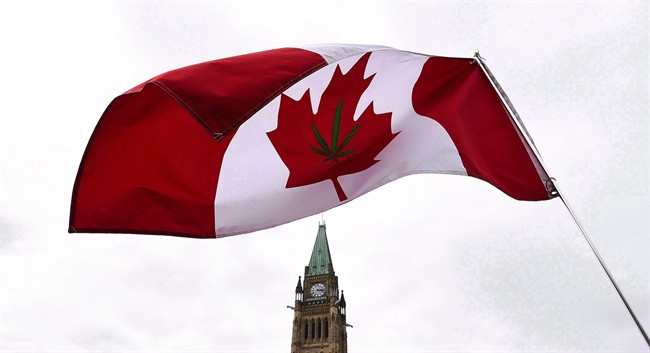 A Canadian flag with a marijuana leaf on it flies during a 4/20 rally on Parliament Hill in Ottawa on April 20, 2017. (THE CANADIAN PRESS/Sean Kilpatrick)

WINNIPEG — The province and Manitoba Public Insurance have launched a public awareness campaign ahead of the federal government’s planned legislation to legalize marijuana next summer.

Focused on showing that drugs and driving don’t mix, the campaign will target new teen drivers, youth, physicians and their patients, and the general public.

“Our hope is that MPI’s public awareness and education efforts over the next year will give all Manitobans the information they need to make safe decisions when it comes to driving after consuming cannabis, and to understand how, similar to alcohol, cannabis and other drugs can impair driving ability,” said Premier Brian Pallister.

Mothers Against Drinking and Driving (MADD Canada) supports MPI’s campaign and has also launched their own promotional efforts against drug-impaired driving.

A recent medical study published by the British Medical Journal shows that crash rates for drivers under the influence of cannabis are two to six times higher than for drivers who are not impaired. The different rates are due to how much and how often drivers have smoked cannabis.

The proposed Cannabis Act would make consumption and possession of marijuana legal in Canada by July 1, 2018.