Home » The Canadian Press » Baloney Meter: How U.S. Border Guards Will Behave in Era of Legal Pot in Canada

Baloney Meter: How U.S. Border Guards Will Behave in Era of Legal Pot in Canada 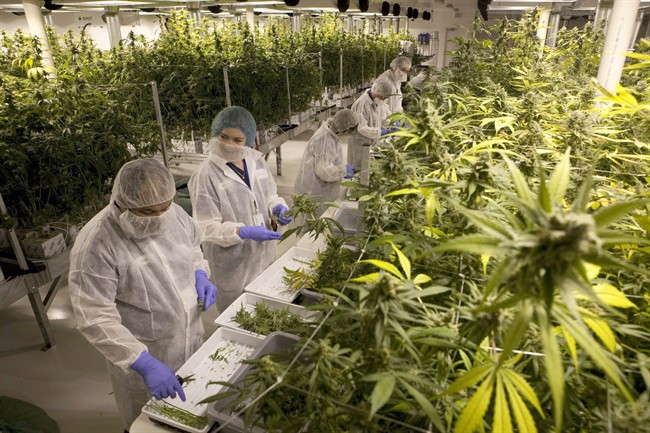 Production staff harvest marijuana plants inside the flowering room at Harvest One Cannabis Inc. in Duncan, B.C., on August 4, 2017. (THE CANADIAN PRESS/Chad Hipolito)

OTTAWA – (If the Trudeau government doesn’t take action now), “you’re going to see hundreds of thousands of Canadians denied entry to the United States because they admitted to using cannabis.”

“If there’s not some sort of change or agreement made between the two countries, then absolutely there are going to be significant problems on July 2.”

Although a number of U.S. states have legalized recreational marijuana, pot remains illegal under federal law, which applies at the border. As a result, Canadians have been turned away by U.S. border officials — sometimes for simply admitting they’ve used it.

Canada is moving to legalize recreational pot use by July 1. The NDP wants the Liberal government to reach an agreement with the U.S. that would ensure free travel over the border following legalization. Don Davies, the NDP’s health critic, fears that in the absence of such an agreement, there will be major problems next July and hundreds of thousands of Canadians will be turned away at the border.

Spoiler alert: The Canadian Press Baloney Meter is a dispassionate examination of political statements culminating in a ranking of accuracy on a scale of “no baloney” to “full of baloney” (complete methodology below).

This one earns a rating of “some baloney.” The assertion is partly accurate but important details are missing. Here’s why.

Many U.S. states allow medical or recreational use of marijuana. However, cultivation, possession and distribution of the drug remain illegal under the Controlled Substances Act.

The border falls under federal jurisdiction, and U.S. Customs and Border Protection officers can deny Canadians and other non-citizens entry on a number of marijuana-related grounds.

Those include a pot conviction in the United States or abroad, or even an admission of use without a conviction; reason to believe someone is involved in drug trafficking; being deemed a “drug abuser” or a “drug addict”; or an intention to violate the federal Controlled Substances Act, for instance, by smoking pot in the U.S., even in a state where it’s legal.

Once ruled inadmissible, a traveller might require a special waiver to enter the U.S.

Immigration lawyers on both sides of the border say there is often a reason, such as a visual cue or statement, as to why people are questioned about drug use when crossing into the U.S.

“If you show up at the border with one of those old Volkswagen vans, acid-wash T-shirt and a Grateful Dead sticker on the back, they’re probably going to ask you if you’ve smoked marijuana,” said Mark Belanger, a lawyer with Border Solutions Law Group in Vancouver.

Scott Railton, a lawyer with Cascadia Cross-Border Law in Bellingham, Wash., said only “a small percentage” of people are questioned, adding a random element to the process.

Railton and Belanger expect their phones to ring more often after July 1 — but they’re not anticipating a dramatic increase in the number of Canadians denied entry to the U.S.

“I really would be surprised if that happened,” given the economic and diplomatic disruption that would ensue, Railton said. “Canada still remains our closest ally.”

Said Belanger: “I do believe that there will be grace — administrative grace — in the sense of not pursuing this issue with Canadian travellers unless there’s a reason to.”

Belanger said, however, the notion of a formal Canada-U.S. agreement is “silly talk,” because it would run contrary to American laws that remain on the books and will still be enforced.

Marijuana possession is against federal law in the United States, and Customs and Border Protection will “enforce the law as appropriate,” the U.S. Embassy in Ottawa said in response to queries.

He also pointed out the rules for admitting foreign nationals to the U.S. and noted that legalization of marijuana in Canada will not have any impact on marijuana’s legality south of the border. Canadians need to be aware of possible actions they may face upon attempted entrance into the U.S. if they possess pot or marijuana residue, he said.

“We are in constant communication, across multiple levels, with the Canadian government on issues relating to our shared border, and this issue has been discussed.”

“We’ve kept in very close touch with our nearest neighbour about this issue, as we do about all cross-border issues,” he said in April when the legislation was introduced.

However, Goodale and Prime Minister Justin Trudeau say sovereign countries have the right to decide who will be allowed entry — and Canada won’t try to tell the U.S. otherwise.

Added Goodale this week: “Canadians should have every expectation that when they approach the United States border, they will be treated in a consistent, fair, and respectful fashion. We have raised that expectation with our American counterparts and they have every right to expect the same treatment in return.”

Canadians are clearly being asked at the U.S. border about marijuana use, and have been denied entry after acknowledging they have consumed it. Legal in Canada or no, U.S. officials can and will continue to use a number of pot-related grounds to turn away Canadians and other foreign nationals.

At the same time, legalization might make Canadian travellers more likely to believe they need no longer fear questioning from U.S. border officials — a cavalier approach that could be asking for trouble.

But on paper, not much will change overnight: U.S. border officials will continue to apply American laws, and will keep asking — at their discretion — selected Canadian travellers about their habits when it comes to marijuana.

Canadian and U.S. officials who are discussing the implications of legal pot in Canada say they are well aware of the issue, which means, in essence, stay tuned.

For these reasons, and barring developments, Davies’ claim — that hundreds of thousands of Canadians would be denied entry to the U.S. for acknowledging the legal use of marijuana — contains “some baloney.”

The Baloney Meter is a project of The Canadian Press that examines the level of accuracy in statements made by politicians. Each claim is researched and assigned a rating based on the following scale:

No baloney – the statement is completely accurate

Full of baloney – the statement is completely inaccurate