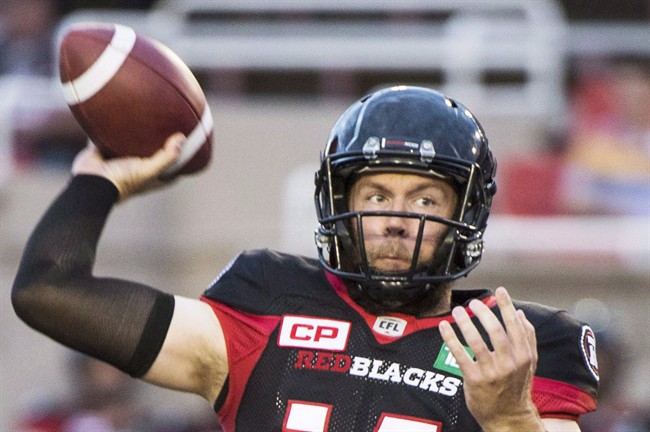 Ottawa Redblacks quarterback Ryan Lindley throws a pass during first half CFL pre-season football action against the Montreal Alouettes in Montreal, Thursday, June 15, 2017. Quarterback Lindley is making his first CFL start for the Redblacks Friday, but Blue Bombers head coach Mike O’Shea cautioned his team is competing against the visitors’ offensive system, not just one player. (THE CANADIAN PRESS/Graham Hughes)

WINNIPEG – Maurice Leggett and Jackson Jeffcoat aren’t salivating at the thought of going up against a third-string quarterback on Friday.

The Blue Bombers are hosting an Ottawa Redblacks squad that’s expected to be led by pivot Ryan Lindley, who would be making his first CFL start.

“He has a strong arm and he has great weapons so you can’t take him lightly because he can still make plays,” Leggett said following Thursday’s walkthrough.

“There’s always an opportunity,” the defensive back/linebacker said of getting another pick. “We just can’t overdo things and try to do too much. That’s when mistakes can happen so we just have to play our game.”

Lindley moved to the top of Ottawa’s depth chart after Drew Tate injured his arm/shoulder in the team’s 29-11 win over Montreal last weekend. Danny Collins is listed at No. 2 and Tate is dressing as the third quarterback.

The East Division-leading Redblacks (5-7-1) lost starting quarterback Trevor Harris to a shoulder injury Sept. 9 and put him on the six-game injured list.

Lindley replaced Tate in the second quarter against the Alouettes and completed seven of 14 pass attempts for 76 yards with one interception.

While he’s making his first CFL start, Lindley is no greenhorn.

The 28-year-old played 10 games in the NFL over four seasons, including seven starts. He got into nine games with Arizona and one with the Indianapolis Colts. The six-foot-three California native joined the Redblacks as a free agent in February.

“It’s not so much about him, it’s about their system,” Bombers head coach Mike O’Shea said. “There’s certain things that we prepared for the last time we played them that are the same.”

Winnipeg defeated Ottawa 33-30 at TD Place on Aug. 4 after kicker Justin Medlock connected on a pair of field goals in the last minute.

Coming off a bye week, Winnipeg (8-3) is in second place in the West Division and has won four straight at home.

“Whoever’s at quarterback, we’ve got to get pressure on them,” said Jeffcoat, an end who also has NFL experience. “We don’t look at (Lindley’s first CFL start) as, oh, that’s an advantage or anything like that. You’ve just got to go out there and play.”

Jeffcoat and his counterparts on the line need to focus on themselves after rush end Jamaal Westerman was shut down for the season this week with an undisclosed upper-body injury.

Westerman’s team-leading seven sacks and leadership will be missed, but Jeffcoat said it’s been fortunate the D-line has rotated players all season.

“Guys have played in games, got a lot of snaps and so jumping in there and playing more snaps is not going to be that difficult,” said Jeffcoat, who has four sacks.

He’s taking Westerman’s spot, with Tristan Okpalaugo on the other end. Jake Thomas and Drake Nevis will start at tackle. The backups include Trent Corney, Faith Ekakite and Cory Johnson.

Winnipeg’s offence, which leads the league in points (345), is expecting to be tested.

The Redblacks have allowed the second fewest points (312), are tied with Calgary for the most QB pressures (93) and have chalked up 25 sacks, tying Winnipeg for fourth in the league.

“We look at them as one of the best defences in the league and they pose a lot of challenges for us,” Bombers running back Andrew Harris said.

That may translate into him doing some extra blocking.

“They definitely bring a lot of different blitzes. Their D-line is good at the twist game,” Harris said.

“With me with the O-line, I’ve got to be in sync with them and help them out in filling holes when they do maybe miss a guy or a free guy comes.”