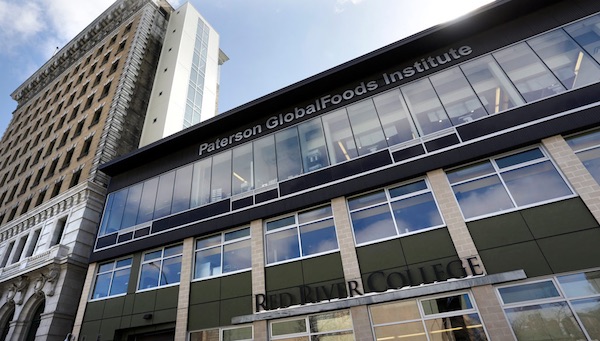 WINNIPEG — A downtown skyscraper, known for housing some of the province’s most talented culinary students, marked its five-year anniversary on Friday.

Red River College’s Paterson GlobalFoods Institute in the Exchange District celebrated the occasion with a pretzel bake-off featuring Mayor Brian Bowman and the college’s president and CEO, Paul Vogt. Under the watchful eye of Suzanne Gessler, owner of The Pennyloaf Bakery and an alumnus of the program, the two traded their suits for aprons and baker’s hats.

“Today we celebrate not only the tremendous impact the Paterson GlobalFoods Institute has had on education in our city, but also the positive impact of the College’s expansion into the Exchange District,” said Vogt.

“Restoring heritage buildings and bringing thousands of students and staff to the area has sparked new economic activity and helped revitalize this iconic community.”

PGI has graduated 618 students since its building was restored from the former Union Bank Tower. The property is now LEED Gold certified, encompassing RRC’s culinary, hospitality and baking programs. PGI also contains the college’s first-ever student residence, which it says is at maximum capacity this year.