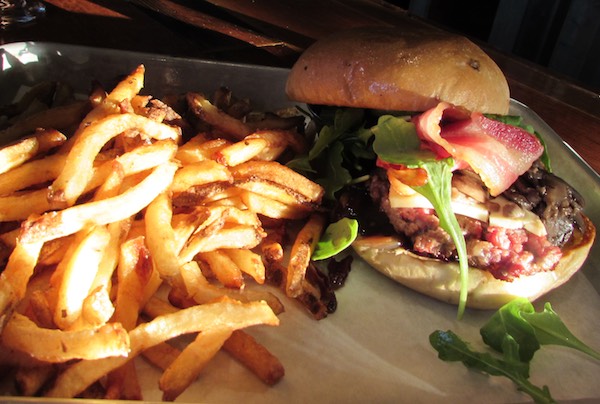 A trifecta has been completed with a recent visit to Brazen Hall at 800 Pembina Highway. The Kitchen & Brewery takes its place with One Great City and Peg Beer Company as Winnipeg’s newly instituted brewpubs. Under this special license, Brazen Hall brews their own beer as well as concocting some interesting culinary fare.

The visit was a belated birthday gift from my son who also works in Winnipeg’s burgeoning craft brewing scene. He wanted to order a flight so he could walk me through the various styles of Brazen Hall beers available. Alas, we were told by one server that two of their beers were not available and we overheard another server say that they had been too busy to serve flights. Indeed they were very busy, especially considering that it was the first day back to school.

In anticipation of our visit during Le Burger Week, I asked my son what burger Brazen Hall was serving. When he replied “Farmer Jon” I thought he said “parmesan” and I was looking forward to tasting an Italian burger. Turns out the Farmer Jon celebrated our local farmers and producers with Trappist cheese, blueberry maple ketchup, arugula and bacon (of course). I could not detect that the mushrooms had been enhanced with Crown Royal or the onions had been braised with stout but it was a very, very good burger. 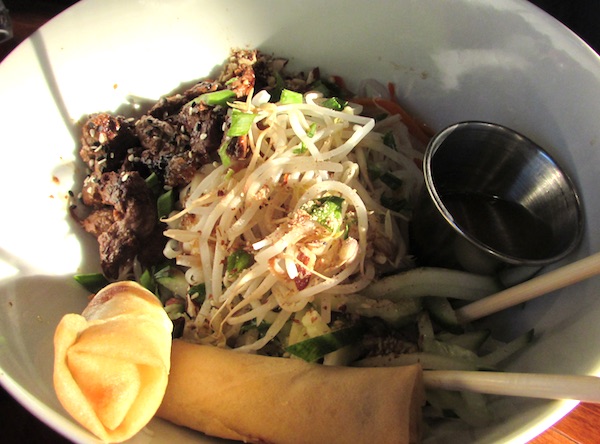 I think the winning ingredient was the combination of ground beef and Winkler farmer sausage. The fries too were delectable and I expect they had been cooked in Manitoba canola oil. They were so good, they were even tasty cold.

My son had a couple of great menu suggestions since he had visited on a number of occasions. I went with his recommendation of a Vietnamese noodle bowl. He said that the ingredients in the dish were conducive to beer drinking. That was all the encouragement I needed. I anticipated an authentic rice noodle but was pleased with the silky hand-made pasta. Typically I choose pork in my noodle bowls but Brazen Hall’s selection comes with beef. I prefer the former. But the additional ingredients of cucumber, mint, lime juice and almonds provided the perfect blend of acidity, crunch and freshness. I was impressed that a brewery kitchen could pull off one of my favourite ethnic dishes.

Brazen Hall is owned by Kristjan Kristjansson and Kris Kopansky. An all-day menu is available and the restaurant is wheelchair accessible.