By Alison Auld, The Canadian Press 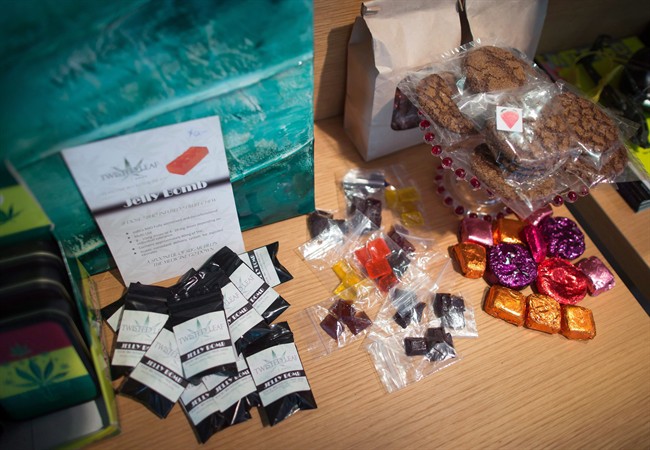 Edible marijuana products are displayed for sale at a Weeds Glass & Gifts medical marijuana dispensary in downtown Vancouver on May 1, 2015. A new survey suggests a large majority of Canadians support the legalization of recreational marijuana use, with many expressing a cautious willingness to try eating pot-infused munchies. (THE CANADIAN PRESS/Darryl Dyck)

HALIFAX – Canadians appear to have an appetite for marijuana-infused munchies, according to a new survey that found a healthy majority both supported the legalization of recreational pot use but had clear concerns about children’s access to edible products containing cannabis.

The poll by researchers at Dalhousie University in Halifax found that about 68 per cent of people across the country favour the impending legalization of pot, with the bulk of that support in B.C. and Ontario.

Just over 45 per cent said they would buy food containing marijuana, with 46 per cent saying they would purchase pot-laced baked goods like brownies and muffins if they were legal.

However, more than half of those surveyed said they had overarching concerns about the potential harms to children who may be drawn to gummy candies, cookies and other confections containing the psychoactive chemical. In B.C., for example, about 81 per cent of those surveyed expressed concern over increased access to pot by young adults.

“The risk element around children was quite high at 58.5 per cent, so there seems to be a bit of paradox out there,” said Sylvain Charlebois, a professor of food distribution and policy at Dalhousie who co-authored the report released Tuesday. “On the one hand, people are willing to accept the legalization of non-medicinal marijuana but at the same time they do recognize societal risks related to doing so.”

The aim of the survey, done over four weeks in August, was to gauge Canadians’ perception of recreational marijuana as a food ingredient when it is legalized next July, if they would use it in their diet and, if so, how they would prepare it.

It found that despite people’s apparent willingness to try edible products, the bulk of survey participants indicated they didn’t know how to cook with marijuana at home and most said they did not consider it a healthy ingredient.

Charlebois said that apparent confusion over what to do with the products should compel the federal government to introduce a framework around the consumption of edibles when legalization proceeds with the Cannabis Act.

Prime Minister Justin Trudeau insists legalizing marijuana will keep pot out of the hands of children and deny criminals the profits of back-alley dealing. Ottawa has said it will not allow the purchase of edible products until it develops regulatory oversight for the goods, including rules on serving sizes and potency, child-resistant packaging requirements and health warnings.

But, Charlebois says that once marijuana becomes legal it will likely be mixed into a variety of products before Ottawa comes up with such measures.

“We should think about rolling out edibles as soon as possible with clear guidelines for the industry,” he said in an interview.

“Right now, provinces are being absolutely hyper-conservative around the distribution of the commodity instead of thinking about the applications of the commodity at the retail level, like at restaurants and food services.”

Charlebois cited the example of Colorado, which legalized marijuana in 2012 without regulations over the sale of cannabis-infused edibles. He says the state saw several cases of young people being hospitalized after eating the goods.

In one case, a 19-year-old ate an entire cookie containing 65 mg of THC even though the shop clerk advised him to divide the treat into six servings. The boy didn’t realize it takes time for a high to kick in when consuming pot in edible form and ate the cookie. That evening he jumped to his death from a fourth-floor balcony.

Colorado saw an increase in the number of marijuana-related poisonings, particularly accidental ingestion by children, in the first year of its new regime and eventually ushered in new regulations limiting THC levels in edible items.

Still, Charlebois says legalized marijuana could be the next big lucrative trend in the Canadian food industry, with curiosity being the Number 1 reason survey participants cited for wanting to try the goods.

“This could be the next gluten-free phenomenon,” he said, citing the multimillion-dollar industry. “A lot of companies are seeing marijuana as the next trend.”