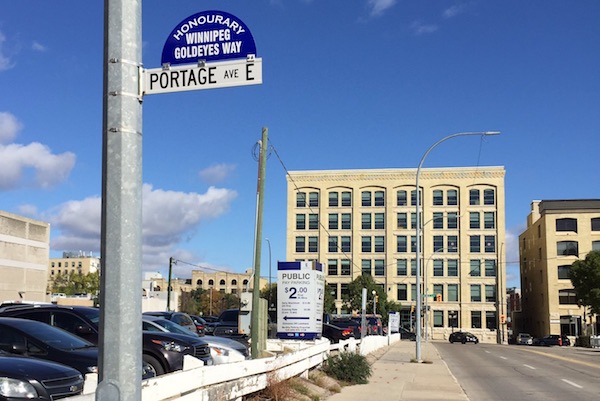 The Winnipeg Goldeyes now have their own honourary street designation outside of the ballpark where they won their most recent American Association championship.

“Winning a single championship series like this is incredible,” Bowman said. “Winning back-to-back championships, however, is certainly an achievement worthy of special recognition from our city.

Honourary “Winnipeg Goldeyes Way” signs will be installed today and remain in place for the next five years.

The Fish won the 2017 American Association on September 20 with an 18-2 win over the Wichita Wingnuts at Shaw Park. It was the Goldeyes’ second consecutive championship, third in the last six years, and fourth in franchise history.

“We are thrilled to be honoured in such a manner by our great city,” said Goldeyes’ president and CEO Sam Katz. “I cannot be more proud of our players, coaches, and staff on winning back-to-back championships.”

The Goldeyes open the 2018 season in May and will be celebrating their 25th year.