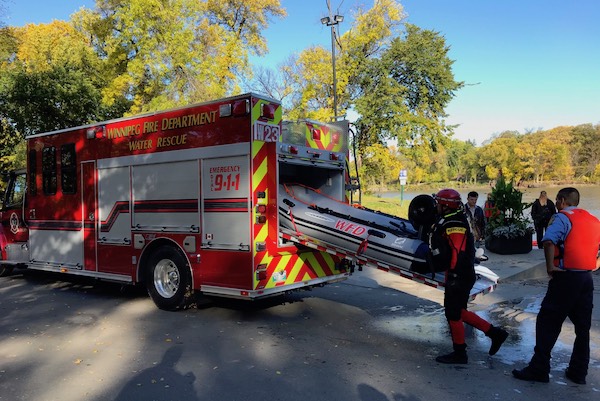 The units were launched Saturday during a training exercise at St. Vital Park, showing the rapid deployment of the equipment in a scenario where someone should fall into the river.

Each zodiac unit rides inside two locally-designed and built fire trucks on a Freightliner M2 106 chassis.

“These new units were designed with input from a committee that included water rescue technicians, safety officers, and emergency vehicle mechanics and features some very unique technology that will benefit the public and members of our water rescue team,” said Deputy Chief Tom Wallace, WFPS.

Wallace said valuable rescue time is saved by having the zodiac units stored within the vehicle and having a built-in inflation device.

“By reducing the time it takes to put these units in the water, we gain valuable time during a rescue operation and can reach people faster.”

The newly designed water rescue units also include a lit and heated area for changing and a space for the storage water rescue suits.

In an effort to reduce carbon emissions, onboard auxiliary power units activate after five minutes of idle time. The generator reduces the need to run the truck’s engine to power lights and heating systems during a long rescue event which will extend the lifespan of the truck’s powertrain.

The new units, which came at a cost of $543,000 each, replace existing units that have reached the end of their usable lifespan. They will serve 15 years on the frontline, with an additional five years in reserve as backup units.