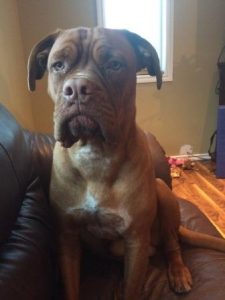 Boomer, a French mastiff, was shot and killed by a robbery suspect at a home near Teulon, Manitoba. (RCMP HANDOUT)

An 18-year-old man is in custody following a botched robbery in which a dog was shot and killed at a home near Teulon, Manitoba.

RCMP say the man entered the rural residence September 26 through a window and gathered several items, including five firearms. Upon leaving, the suspect came across Boomer, a French mastiff.

The dog was shot three times upon trying to get away. The shooter fled as the homeowner returned to the property.

Police arrested the suspect shortly after and a canine helped recover firearms that the man had hidden in the bush.

Boomer was pronounced deceased at the veterinarian’s office.