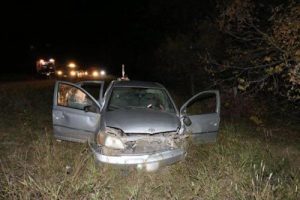 A Toyota sedan rear-ended a pickup truck in the RM of Stanley on Monday, injuring two people, as well as the driver. (RCMP HANDOUT)

RCMP say a driver was texting when he rear-ended a pickup truck in the RM of Stanley on Monday.

The truck had stopped on the side of Road 33 West while two people attempted to capture a donkey that had escaped its pen.

Police say the 18-year-old man driving the vehicle was texting and driving on a suspended licence at the time. He also suffered minor injuries.

“Distracted driving can have very serious consequences,” said Tara Seel, RCMP media relations officer. “When you are driving, your sole focus should be on the task at hand. Driving is a big enough challenge that it should occupy your full attention.”