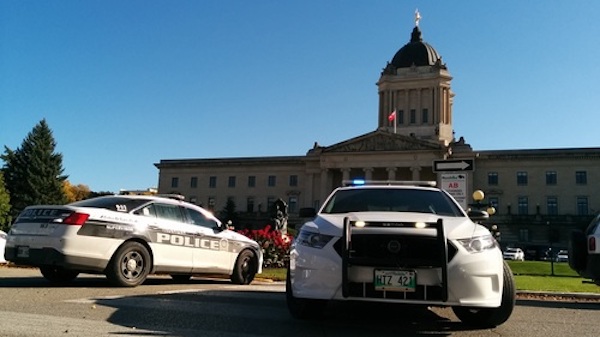 Winnipeg police responded to the Manitoba legislature for a security threat on Thursday, October 5, 2017. (CHRISD.CA)

WINNIPEG — The Manitoba Legislative Building was briefly evacuated Thursday afternoon due to a “suspicious circumstance.”

Speaker Myrna Driedger said there was a security threat in the public gallery.

Premier Brian Pallister later said a threat was phoned in — something he called mischief-making and unproductive.

Emergency crews responded at around 3 p.m. and police advised the public to avoid the area.

The all-clear was given at approximately 4:15 p.m. and staff began making their way back into the building.

The security scare comes on the same day the province announced it was beefing up security at the legislature.

Emergency crews are on scene at The Legislature for a suspicious circumstance. Please avoid the area at this time. Thank you.