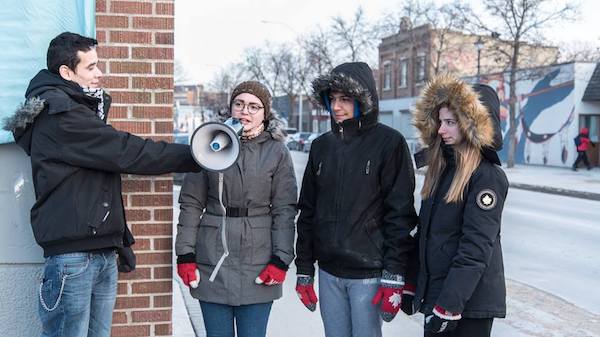 Michael Champagne (left), one of the co-founders of Meet Me at The Bell Tower. (HANDOUT)

WINNIPEG — New research backs the positivity of some civic protests when it comes to city planning.

Meet Me at The Bell Tower is a prime example of such a movement that has livened up an area of Winnipeg’s North End at the corner of Selkirk Avenue and Powers Street.

Led by Michael Champagne, a group of Indigenous activists gather each Friday night to bring about awareness of the political, economic, and social struggles and experiences of people in the area.

Jason Syvixay, a master of city planning graduate student from the University of Manitoba, undertook the research.

“Jason’s research provides a clear and straightforward process for current and future city planners. The lesson here is to work with engaged and vocal citizens that are already doing community building locally to inform your processes. Residents know what we need if only we are included in a meaningful way,” Champagne added.

Syvixay says many planning interventions in the past have tried to revive what was once a thriving destination in the North End.

“Perhaps the solution is to work with groups like Meet Me at The Bell Tower,” he said.

Syvixay will release his reasearch during next week’s meeting at the tower, on October 20 at 6 p.m.

Original artwork by Kal Barteski, representing the research, will also be gifted to organizers.