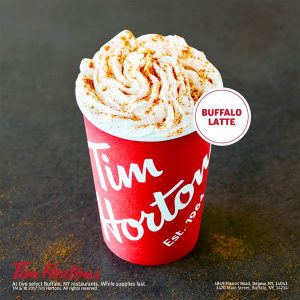 VANCOUVER – It may be pumpkin spice season, but Tim Hortons is experimenting with a far more bizarre new latte flavour — Buffalo Sauce, in the latest move by restaurants to create buzz-worthy concoctions.

The company says two Buffalo, N.Y.-based restaurants will serve the latte, made with a bold Buffalo sauce flavour and finished off with whipped topping and dusted with zesty Buffalo seasoning.

Tim Hortons says the idea to incorporate Buffalo sauce into its menu stemmed from noticing both the coffee-and-doughnut chain and the sauce were created in 1964.

Its innovative, limited-edition items are part of a broader trend restaurants are dishing up.

Burger King, which is owned by the same parent company as Tim Hortons, has served both a black- and red-bun version of its Whopper burger.