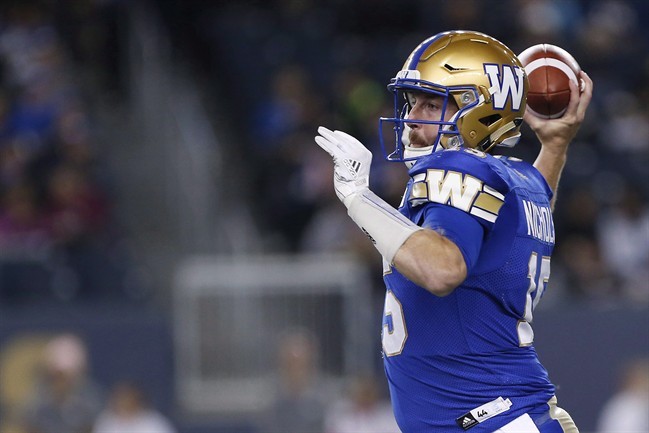 Winnipeg Blue Bombers quarterback Matt Nichols (15) looks for his receivers during the first half of CFL action against the Hamilton Tiger-Cats in Winnipeg on October 6, 2017. Even if wet weather forces Matt Nichols to take the glove off his injured throwing hand, the Blue Bombers quarterback says he’ll be able to play just fine Saturday afternoon when Winnipeg hosts the B.C. Lions with the opportunity to clinch a playoff spot. (THE CANADIAN PRESS/John Woods)

The Blue Bombers host the B.C. Lions Saturday afternoon, with the forecast including a chance of rain or wet flurries.

Nichols injured the ring finger on his right hand in last week’s loss to Hamilton and has been wearing a modified glove in practice this week. It has holes cut out to free his thumb, index and middle fingers, but the ring and pinkie fingers are covered.

He rated his throwing with the glove as “exactly the same” compared to before the injury. However, if it was raining a lot he’d have to take it off because water would get inside and the glove isn’t very waterproof to begin with.

But that shouldn’t cause any problems, he predicted after Friday’s walkthrough.

“I wouldn’t be going out there if I didn’t feel like I could do my job correctly,” said Nichols, who had the ring finger bandaged.

“(B.C.) has got some good (defensive backs), athletic DBs over there. If you can’t throw the ball the way you’re used to, things probably aren’t going to work out well, so I wouldn’t be going out there if I didn’t think I could make every throw.”

It could be a close contest as the last five games between the clubs have been decided by three points or less.

The Bombers (10-4) haven’t lost back-to-back games this season. They can clinch a playoff spot in the CFL West Division with a win or tie against the Lions (6-8), who wouldn’t be eliminated unless Saskatchewan and Edmonton also win this weekend.

Winnipeg would also gain at least second place and a home playoff date with a win and losses by the Eskimos and Roughriders.

The Bombers could have snagged a playoff berth last week with a victory over Hamilton (4-10), but they got off to a bad start and then Nichols was replaced by backup Dominique Davis to begin the second half of what ended up as a 30-13 Ticats’ win.

“We’re ready to come back out here and prove that we were better than what we displayed,” Leggett said.

And now would be a good time to clinch a playoff berth for the second straight year, especially against the club that beat them in last season’s West semifinal.

“Better now than later,” Leggett said. “We’re not worried about anything else but doing what we need to do.

The Lions, 1-6 in their last seven games, are also coming off a loss that was hard to swallow. They gave up a 19-point lead in falling 30-25 at home to Ottawa last week.

“We have plenty of motivation knowing that our only shot to get into the playoffs is to win,” Lions starting quarterback Jonathon Jennings said.

“We’ve got to make sure we come in here and we’re excited to bring on the challenge.”

The Lions’ defence has been struggling, including not forcing a turnover in their last three games.

But they do feature linebacker Solomon Elimimian, who has a league-high 109 tackles.

Pressuring Nichols will be a key for the defence, but Elimimian didn’t think the Bombers pivot was going to be off his game after practising all week with his injured hand.

“I’m not expecting not to see the Matt Nichols we’re accustomed to – somebody’s who’s tough, who’s resilient, who can stay in the pocket and make the throws,” Elimimian said.