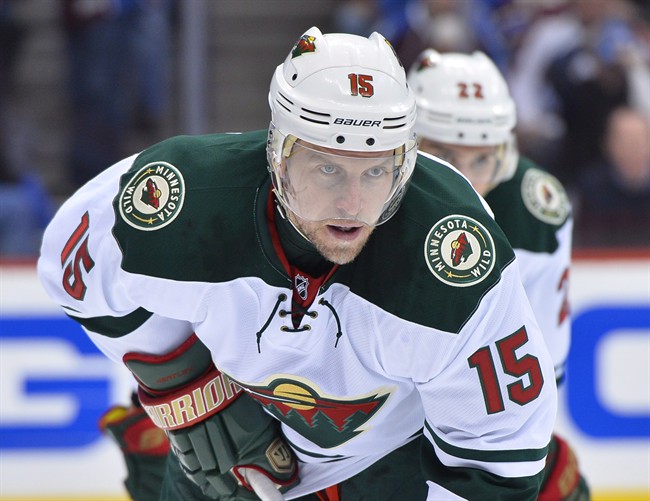 This April 30, 2014 file photo shows Minnesota Wild left winger Dany Heatley during the first period of an NHL hockey game against the Colorado Avalanche, in Denver. Winnipeg police have charged an ex-NHL agent with fraud alleging he bilked former Ottawa Senators Chris Phillips and Heatley out of $12 million. (THE CANADIAN PRESS/AP/Jack Dempsey)

An ex-NHL agent has been charged by Winnipeg police after alleging defrauding former Ottawa Senators Chris Phillips and Dany Heatley out of $12 million.

Police say Stacey McAlpine, 54, used funds provided by the victims to invest on their behalf. Instead, police say McAlpine used the cash for personal business and provided both players with fraudulent account statements for their bogus investments.

“After years of pursuing this case, I am pleased that the Winnipeg Police have also become involved and made this arrest,”
Heatley said in a statement released by his lawyer.

Police arrested McAlpine on Tuesday in the 200 block of Sharp Boulevard. He’s been charged with two counts of fraud and theft over $5,000, and laundering proceeds of crime.