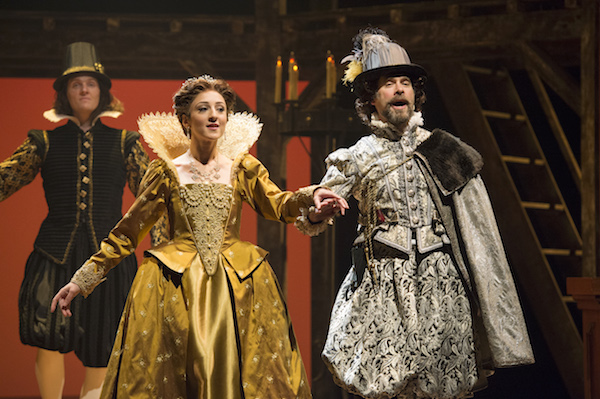 There’s something special about an opening night performance, and there’s something more special yet about an opening season performance, particularly when that season is your diamond anniversary. The Royal Manitoba Theatre Centre opened its ground-breaking 60th season on Thursday, and while the story may not be new to some audience members, Shakespeare in Love is a crowd-pleaser through and through.

Based on the 1998 movie of the same name, Shakespeare follows the Bard, struggling with writer’s block, as he tries to compose his next masterpiece. Enter Viola de Lesseps, obsessed with Two Gentlemen of Verona and the idea of being an actor, who dresses up as a man to audition for the next big play. Through a series of happenings, the two meet as their true identities – Viola as her female self, and Shakespeare as not the playwright or the legend, but the man, Will. She inspires him to write Romeo and Juliet, and the two must then decide which they find important: sharing true love with no one or sharing art with the world.

I should make it clear that although this is not a play written by Shakespeare, it is a play about Shakespeare, and therefore a lot of Shakespearean dialogue and references are packed inside, many wink-winks and tongue-in-cheek theatre jokes. If you’re well-read in Elizabethan literature, or at least Romeo and Juliet, you’re more likely to enjoy the show. Some lines of dialogue pass quickly, twisted around Old English tongue, so sit up. Pay attention. This is not the kind of show where you can relax and let it wash over you. You’ll want to listen.

That is not to say Shakespeare is entirely stuffed with soliloquies and sonnets. As in any good Shakespeare comedy, there is lots of physical humour (particularly from Ned Allyn, played by Kayvon Khoshkam) and just enough tavern antics to keep the masses pleased. The supporting cast (much of which is made up of Winnipeggers and RMTC mainstays) tends to bring the jokes, leaving the drama to the leading couple, played respectively by Andrew Chown and Bahareh Yaraghi. They are the eye of a swirling hurricane, caught between reality and romance, both knowing that soon, the storm will come.

If you are not a fan of drama, comedy, romance, Shakespeare, England, multi-dimensional sets, plays about plays, phenomenal period costumes, or dogs, then maybe stay home. But if you’re even a little bit interested in any of those things, buy your tickets now. This lovely adaptation’s lease hath all too short a date.

Shakespeare in Love is on at the John Hirsch Mainstage until November 11. For more information, go to RoyalMTC.ca.

← Previous: Use It or Lose It: Jackman-Atkinson Next: Man Dies in Sherbrook Street Shooting →
Tags: Manitoba Theatre Centre | Winnipeg