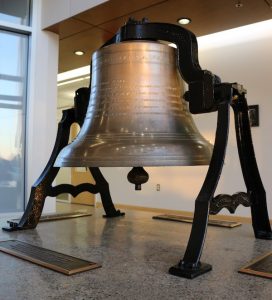 The Coronation Bell is now on display at Brandon’s No. 1 Fire Hall. (CITY OF BRANDON)

The historic Coronation Bell that was originally donated to the Brandon Fire Department in 1902 is now back on display.

The bell was named in honour of the coronation of King Edward and hung in the bell towers of Brandon’s two historic fire halls located at 7th Street and Princess Avenue. It was removed in 1971 in order to reduce structural stress on the bell tower.

For 69 years, it rang to alert firefighters of fires and signaled the time to citizens every day at 8 a.m. and 6 p.m.

“When Brandon Fire & Emergency Services moved into its new location in the summer of 2010, we always had a vision that the Coronation Bell would have a place at our main hall,” said Brandon Fire Chief Brent Dane.

“With the bell now installed in the front foyer of the No.1 Fire Hall, it serves as a daily reminder of the proud history of fire protection services in our community and is a very appropriate way to honour BFES’s past.”