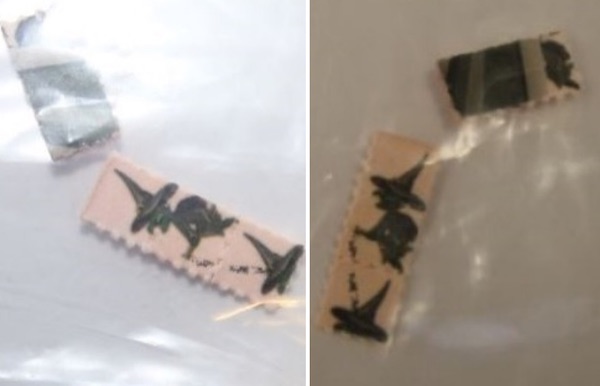 Halloween-themed fentanyl blotters with a witch graphic has prompted a warning from Winnipeg police. (WPS / HANDOUT)

As Halloween nears, Winnipeg police are warning the public of seasonal-themed fentanyl blotters that may be making the rounds.

Police seized six blotters during a drug bust on Friday, which includes a graphic of a witch riding a broom.

The blotters were one of the several items seized during a raid on a Fort Rouge home, including 11 grams of methamphetamine worth $1,1000. Officers also found numerous capsules containing an unknown white powder, bear spray, various pieces of identification and $1,800 in cash.

Police say the blotters appear to be harmless pieces of paper, but are dangerous to handle. Anyone who finds one is asked to call 911.

Three men and a woman face numerous drug-related charges in relation to the bust.