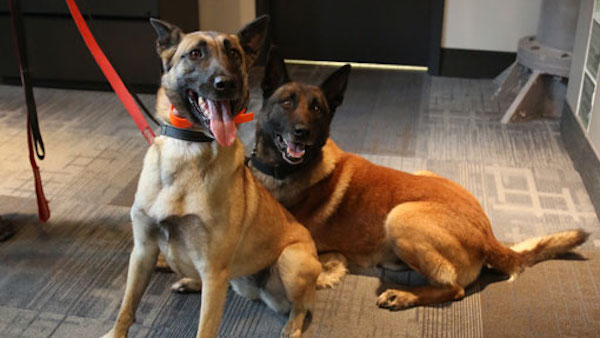 Dante and Daisy are already on duty, while their younger eight-week-old companions have begun their explosive ordnance disposal training under Bessason.

The dogs have been working at the arena since the start of the 2017-18 NHL season.

Two of the three black Labrador retrievers have been named already. Grace, in honour of Gord Downie and his Tragically Hip anthem, and Ryp, in honour of late Manitoba Moose player Rick Rypien.

True North is turning to the public to help name the third puppy. Winnipeg Jets season ticket holders can submit name suggestions, while the general public will get a chance to vote on the finalists. The final four will be announced Monday, November 6 at noon. Voting will be open until Wednesday, November 8 at 11:59 p.m.

The winning name will be announced Friday, November 10 at the Winnipeg Jets NHL Centennial Fan Arena.