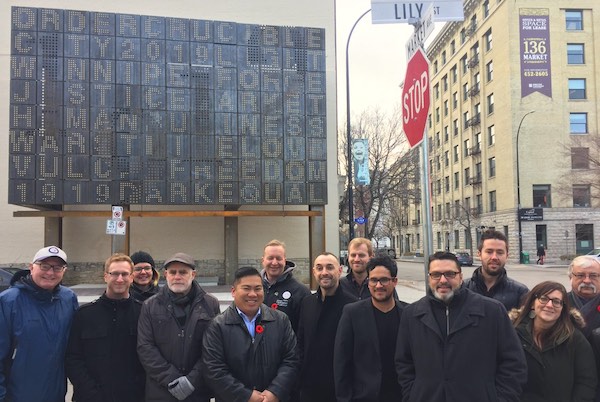 A monument in the Exchange District commemorates the 1919 Winnipeg General Strike. (@CITYOFWINNIPEG / TWITTER)

A monument commemorating the Winnipeg General Strike was unveiled downtown on Thursday.

A design competition last year launched by the city invited proposals for an interpretive installation in the Exchange District. In spring 2016, Monteyne Architecture Works was selected as the winning firm.

“Commemorating the labour movement that resulted in the 1919 General Strike is an important reminder of our shared history and values of fairness and equality,” said Mike Pagtakhan, city councillor for Point Douglas.

“I want to congratulate and thank Monteyne Architecture Works for being able to create a very unique and inspiring piece of architecture that all Winnipeggers can appreciate and enjoy.”

The structure of the monument is designed to echo the steel structures of the early 20th century and is a nod to Vulcan Iron Works, a Point Douglas landmark. Built primarily of weathering steel, the monument will acquire an oxidized patina that will protect it from the elements for the next 100 years.